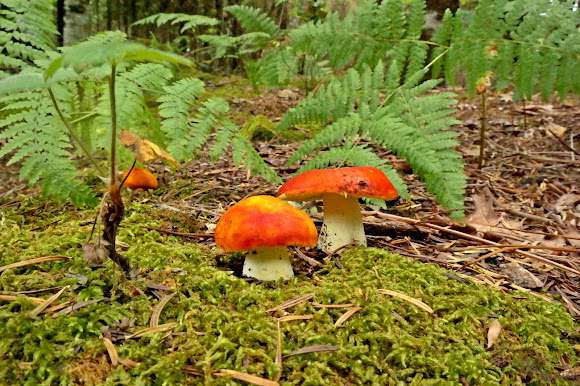 Russula aurea, commonly known as the gilded brittlegill, is an uncommon species of mushroom found in deciduous woodland in Europe in summer and early autumn. Unlike many red-capped members of the genus, it is edible and mild-tasting. The cap is 4–9 cm (1.6–3.6 in) wide and a blood- or orange-red in colour with ridged margins. Sticky when wet, it is initially convex, then later flat, or depressed; it is able to be peeled half-way. The widely spaced gills are ochre with yellow edges, and adnexed or free. The stipe is up to 3–8 cm (1.4–3.2 in) long and 1–2.5 cm (0.4–1 in) wide, cylindrical and white or cream to golden-yellow. The brittle flesh is yellow and the taste mild. The spore print is ochre, the warty spores are oval or round and measure 7.5–9 × 6–8 μm.

Russula aurea is found in Europe and is uncommon in Britain. It has been recorded as far east as the Black Sea region. It occurs under deciduous trees in summer and early autumn, in particular beech, oak and hazel.

The overall yellow tone of Russula aurea distinguishes it from the peppery and inedible red-capped Russulas, such as the bloody brittlegill (R. sanguinaria), the sickener (R. emetica), and the beechwood sickener (R. nobilis).