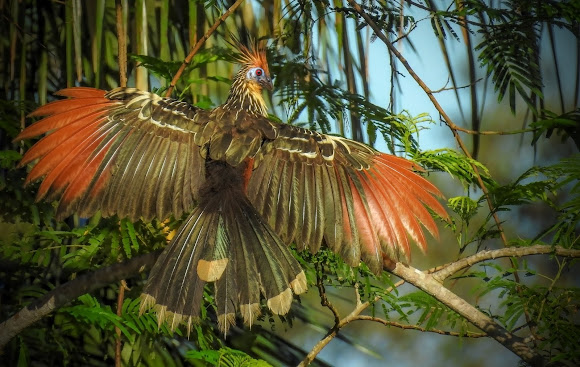 Hoatzin primitive chicken-sized bird of South American. The young possess two large claws on each wing, a trait that has led some scientists to link the species with the fossil Archaeopteryx of the dinosaur era. It measures about 62 cm long and weighs 800 g.

It is a species of tropical bird found in swamps, riparian forests, and mangroves of the Amazon and the Orinoco Delta in South America.

Hoatzins are noisy birds, and have a wide variety of vocalizations. They are also recognized for their odor, comparable to manure. These birds are vegetarians and tend to forage around dawn and dusk. While foraging, they favor young leaves, buds, and shoots which are typically higher in nutrients, easier to digest, and higher in water. They are rarely observed to drink, as much of their water comes from their food. http://www.dailymotion.com/video/x2t1y15...

Congratulations Aisse! I only learned about these birds recently. Wonderful image and very well deserved SOTW. Thank you for sharing :)

Congrats to you Aisse... Really a bird from the Dino era!!!

Beautiful. I can't stop seeing it.

Congratulations Aisse Gaertner! This beautiful Hoatzin has been chosen by the PN Rangers as our Spot of the Week!

Hi Aisse! This is such a fantastic shot, and of a very special bird! Could you please provide some information on your spottings which is specific to what you saw, and not generic. In particular on Project Noah we're interested in the habitats where spottings are made. From our FAQ: "Description: This is where you can add details that may not be clear in the photograph, such as approximate size, which will help in identifying the organism. For animals and birds, you could describe their actions as you saw them, e.g. did they run, walk, hop, swim, dive; were they alone, in pairs, small groups large groups. If there are differences between the males and females but your photo only shows one you could explain these. It is not necessary to copy lengthy descriptions from reference sources here as there is a 'reference links' box for this purpose.

Habitat: Please state the actual habitat where you photographed the spotting - this information can then be used to track changes in habitat, such as those caused by human intervention or habitat destruction. Again, it is not necessary to state published habitat information here, this can be referenced in the 'reference links' box.

Notes: Here you can tell us about your encounter with the spotting and add anything not covered in the above fields. We would also like you to state here if the spotting was made in a zoo, aviary, wildlife center, or other similar establishment."