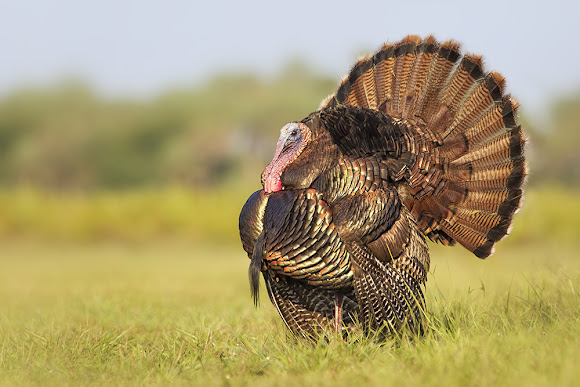 I can safely say that never before have I underestimated the beauty and majesty of a bird as much as I have the wild turkey. Shortly after dawn, I emerged from the tent where we were camping and almost immediately heard some loud gobbling, so decided to head in the direction of the noise. I was stunned to see not one proud tom but three displaying and trying to out-compete each other. The one pictured here was by far the most dominant but all three were impressive individuals, and it was one of those rare occasions where the animals are so wrapped up in the moment that they forget (or dont care) that you are there. Needless to say, despite all the showing off and testosterone-fueled competition, the hen turkeys appeared totally disinterested and continued to peck at the ground about 20 yards away throughout the contest. I will upload a pic later on of all three turkeys together but just wanted to give this guy the portrait treatment first.

Wow, what a shot!