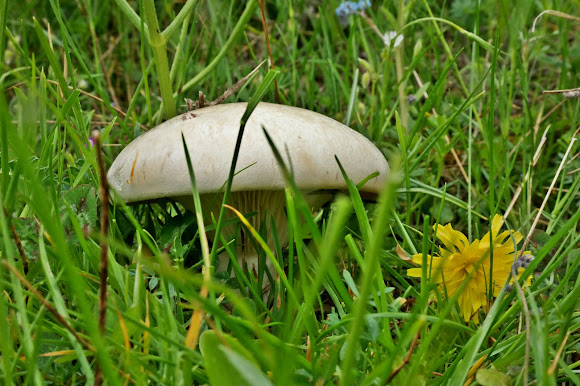 Pleurotus nebrodensis, commonly known as Funcia di basilicu is a fungus that was declared by the IUCN as critically endangered in 2006.[1] This fungus only grows on limestone in northern Sicily and northern peloponesse in association with Cachrys ferulacea (family Apiaceae).[1] The characteristics of the mushroom are its creamy white to yellow colour, its diameter of between 5 and 20 centimeters (2 and 8 in), its extremely angled gills, and the breaking apart of the cap surface at maturity.

It grows on limestone substrates, in pastures containing "Basiliscu"<< Cachrys ferulacea>>, a member of the Umbelliferae or celery family. This mushroom only occurs in northern Sicily and northern Peloponesse, growing in scattered localities from 1,200-2,000m in altitude.

P. nebrodensis was classified as critically endangered(In Italy) because it is found in an area of less than 100 square kilometers (39 sq mi), and the population has become fractured.In addition, there are not as many mature fungi, and it is losing its natural habitat. An additional reason for the decline is that collectors are now picking unripe specimens. It is currently estimated that fewer than 250 Pleurotus nebrodensis reach maturity every year. In opposite, in Greece the populations are thriving at northern peloponesse, mostly due to the inhospitable places that this mushroom uses like habitat, which are very hard to reach.

Thank you very much CorduneanuVlad!

Very nice one. Congratulations on your find.