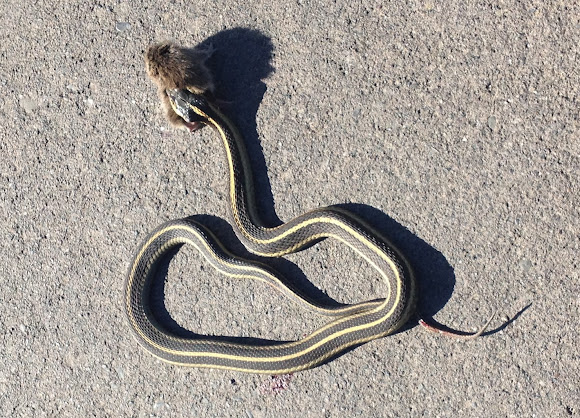 Spotted at a golf course. It had come out of the landscaping.

I spotted this snake just after it captured a Vole. I heard the squeaking as both rolled down hill. The jaws of the snake were still separating and trying to hold onto the vole. The location lists Intergrade species all being aquatics with a diet mainly on amphibians and fish. Drought may have changed the diet on these aquatic species.

Yes Hema. Any oil spill is bad news for birds and more.

what a bad timing for the Galveston oil spill. t is so heartbreaking!!

yes but the levels are too low to effect humans. It only effects it's prey.

that is sad indeed. These are venomous?

Thank you Hema.
And the sad part is it may not have eaten it. These are aquatic Garters. Their diet is frogs, newts and fish. Because of the drought it's diet changes,but their jaws may not be able to open wide enough for something this big. I didn't stick around to see

Thank you Tiz. I didn't know the location I found it would be the overlap of three species and over time came interbreeding.

What an interesting spotting, and great timing! Good to read that it is not toxic to humans, as well as the rest of the information you added :)

They figured it could be a intergrade but they still didn't think so because of the vole. Intergrades diet was mostly frogs, newts and fish.

A few years ago during a survey for another species, I found a very similar gartersnake in a drainage pond created by a landslide just east of your sighting (and northeast of the quarry). At the time, I concluded it was an intergrade aquatic gartersnake. I will try to find the photo and post it.