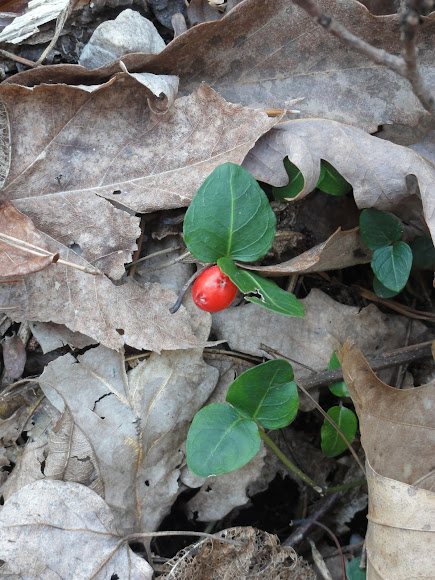 Partridge Berry is a native perennial, a small, woody, trailing vine with 6 to 12 inch, slender, trailing stems that does not climb but lays prostrate on the forest floor. The trailing stems root at nodes which come in contact with the forest surface and may spread into colonies several yards across. The dark-green, evergreen leaves are simple, opposite, ovate, with a pale yellow midrib, are ½ inch across, with a short stalk. In late spring, a pair of white flowers (with a single calyx) appears. Each small, fragrant flower has four brilliant white petals that are pubescent and unite into a funnel-shaped tube that is also fringed with hairs. The pair of flowers occur in two forms (dimorphous). In the first form the pistil is short and the stamens are long; in the second form the pistil is long and the stamens are short. This structure prevents each flower from fertilizing itself. Both flowers must be pollinated to obtain a single scarlet berry. Each berry is the result of the fusion of each ovary of the pollinated pair of white flowers. As such, each berry has two bright red spots on its surface.

Partridge berry is a fairly common inhabitant of deciduous and coniferous forests in rich organic soils with dappled sunlight to complete shade. Depending on latitude and elevation Partridge Berry flowers from late spring to early summer. Partridge Berry is found throughout eastern North America from Newfoundland to Ontario and Minnesota, south to Texas and Florida

Spotted growing on West Loop at Pine Mountain Recreation Area (Cartersville, GA) You can really see the two spots - they look like blemishes - on this specimen. American Indian women made a tea from the leaves and berries that was consumed during childbirth. The scarlet berries are edible but rather tasteless, with a faint flavour of wintergreen, resembling cranberries (to which they are not closely related).