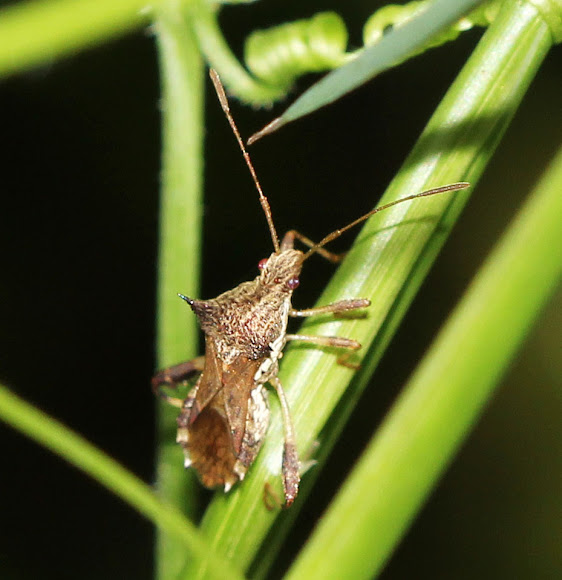 Gralliclava horrens (Dohrn, 1860) is a Species in the Family Coreidae. The description I was about to place here (from my own amateur catalogue) could probably be used to describe any of several Coreids as it is rather vague. So I think it would be better to quote this from https://en.wikipedia.org/wiki/Coreidae. "The Coreidae commonly are oval-shaped, with antennae composed of four segments, numerous veins in the membrane of the fore wings, and externally visible repugnatorial stink glands. They vary in size from 7 to 45 mm long, which implies that the family includes some of the biggest species of Heteroptera. The body shape is quite variable; some species are broadly oval, others are elongated with parallel sides, and a few are slender."

Spotted in a rice field which had become overgrown with a tangle of grasses and foliage, after the harvest, when it was allowed to lie fallow. The G. horrens were pretty widespread across a wide variety of growth, but there was a significant amount of Mongo Bean (Phaseolus aureus) sprouting up because the field had been planted with that in a previous fallow season and the Coreids showed an overwhelming preference for it.

A nice spotting of G. horrens is documented in https://www.projectnoah.org/spottings/15....