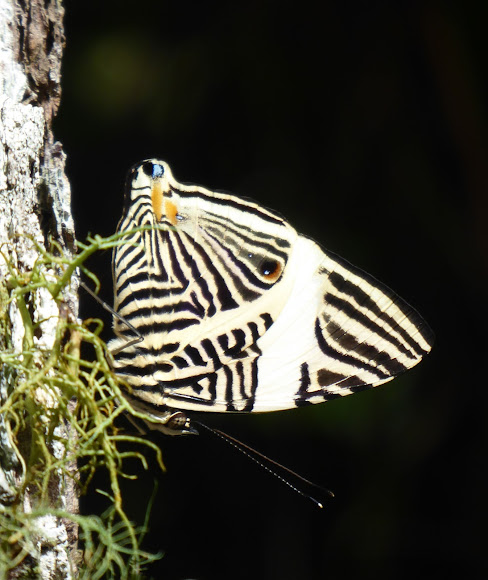 Remained stationary for an extended time, then briefly spread wings.

Head down at about 8:50 AM on trunk of tree on verge of forest along dirt road leading to Rancho Naturalista, Costa Rica.

From: http://www.learnaboutbutterflies.com/Ama... There are 2 Colobura species - dirce and annulata, both found throughout the neotropical region. Colobura annulata can be distinguished from dirce by the much narrower submarginal band on its underside forewing, and by the slightly different sub-costal markings. It was separated from dirce only in 2001, and is much less common than that species. The butterflies habitually sit on the tree trunks in a head downwards posture, at a height of about 2 metres, to imbibe sap and moisture from crevices in the bark. If approached they sometimes try to evade the intruder by running around to the opposite side of the tree, and if followed will run back to their original position - quite literally forcing the observer to run around in circles after them. They are extremely reluctant to take flight when feeding, and if they are forced to do so they quickly return to resume feeding. Colobura annulata is distributed from Mexico to Bolivia.

Thank you bayucca... but WHAT a challenge to orient myself to the descriptions vs. my photos!! I kept getting lost in all the lines. I found the 2001 paper by Willmott, Constantino and Hall and Fig 1 helped to orient me correctly, I think. Subtle differences at first glance - but more obvious once I actually 'see' them...finally! I will upload a few more images (the ones against the bark vs. the black background make it easier to see the wing margins).