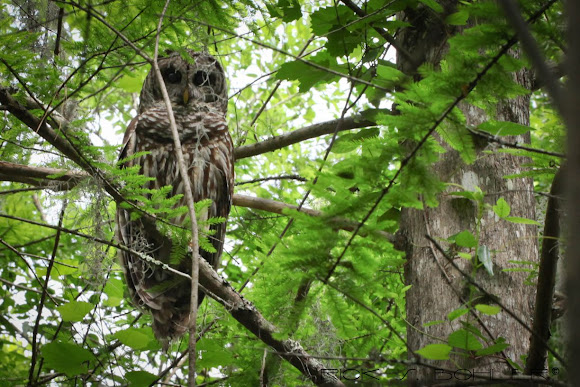 The adult is 40–63 cm (16–25 in) long with a 96–125 cm (38–49 in) wingspan. Weight in this species is 500 to 1050 grams (1.1-2.3 lbs).[2] It has a pale face with dark rings around the eyes, a yellow beak and brown eyes. It is the only typical owl of the eastern United States which has brown eyes; all others have yellow eyes. The upper parts are mottled gray-brown. The underparts are light with markings; the chest is barred horizontally while the belly is streaked vertically. The legs and feet are covered in feathers up to the talons. The head is round and lacks ear tufts, a distinction from the slightly smaller Short-eared Owl, which favors more open, marginal habitats. Outside of the closely related Spotted Owl, this streaky, chunky-looking owl is unlikely to be confused over most of the range. Due to their fairly large size, the Barred Owl may be confused for the Great Horned Owl by the inexperienced but are dramatically different in shape and markings. The Spotted Owl is similar in appearance but has spots rather than streaks down the underside.

Breeding habitats are dense woods across Canada, the eastern United States, and south to Mexico; in recent years it has spread to the northwestern United States, having gradually spread further south in the west. The species is particularly numerous in a variety of wooded habitats in the southeastern United States. Recent studies show suburban neighborhoods can be ideal habitat for barred owls. Using transmitters, scientists found that populations increased faster in the suburban settings than in old growth forest. A factor of this suburban success may be easily accessible rodent prey in such settings. However, for breeding and roosting needs, this species needs at least some large trees and can be locally absent in some urban areas for this reason. The main danger to owls in suburban settings is from cars. The increased offspring offset the death rate due to impacts from cars and disease

The Barred Owl is a very opportunistic predator. The principal prey of this owl are meadow voles, followed by mice and shrews of various species. Other mammals preyed upon include rats, squirrels, rabbits, bats, moles, opossums, mink, and weasels. A Barred Owl was photographed in Minnesota in 2012 predaceously grabbing and flying with a full-grown domestic cat, a semi-regular prey item for the Great Horned Owl but previously unknown to be taken by this species. Birds are taken occasionally and commonly include woodpeckers, grouse, quails, jays, icterids, doves and pigeons, and even domestic ducks. Less commonly, other raptors are predated, including smaller owls. Avian prey are typically taken as they settle into nocturnal roosts, because these owls are not generally nimble enough to catch birds on the wing. It occasionally wades into water to capture fish, turtles, frogs and crayfish.Additional prey include snakes, lizards, salamanders, slugs, scorpions, beetles, crickets, and grasshoppers. Barred Owls have been known to be attracted to campfires and lights where they forage for large insects. Prey is usually devoured on the spot. Larger prey is carried to a feeding perch and torn apart before eating. The Barred Owl hunts by waiting on a high perch at night, or flying through the woods and swooping down on prey. A Barred Owl can sometimes be seen hunting before dark. This typically occurs during the nesting season or on dark and cloudy days. Of the North American owls, only the Burrowing Owl is more likely to be active during the day. Daytime activity is often most prevalent when Barred Owls are raising chicks. However, this species still generally hunts near dawn or dusk.