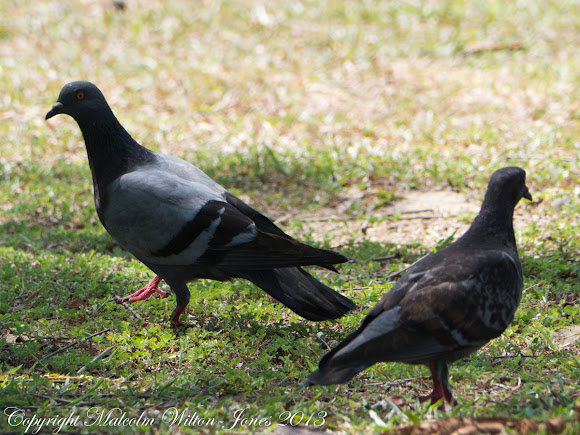 Feral Pigeons are descendents of the original Rock Dove which was found only in Europe, North Africa (c.N of 30ºN) and West Asia (c.West of 45ºE). Many of these, along with some Stock Doves, were domesticated from several thousand years ago, spread throughout the world and allowed to escape at times. Their resultant expansion has led to an estimated 10-30 million worldwide. They come in all colours including some which look very similar the the true Rock Dove (such as the bird on the left) but these are only found now on isolated coasts of North-western Europe, perhaps 100,000. All others are now considered Feral where-ever they are in the world, regardless of what various people say on the internet. Hundreds of thousands of domesticated Rock Doves, and some domesticated Stock Doves, with which they had mixed, were introduced to Southern Africa, India, South-east Asia, China, Indonesia, Australasia, North and South America and wherever else colonists settled. Recent DNA testing has confirmed that no True Rock Doves have been found in any of these populations.