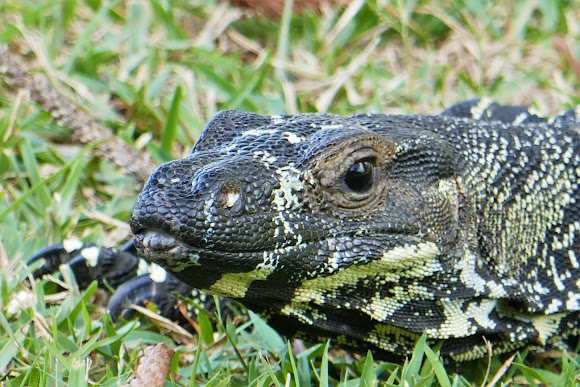 I spotted this large goanna quite by chance. I was just walking and daydreaming, and it appeared miraculously in front of me only a short distance ahead. Snakes like red-bellied blacks also occur here, so I should have been paying much closer attention. I was shocked by this lizard's size, probably being one of the largest I have ever seen (close to 2 metres, or over 6 feet). There are different characteristics that identify this species, but I usually look for those distinctive chin-strap markings. Once I see them, I have a good idea of what I'm dealing with. I am very careful around goannas, particularly when they are accustomed to people. Those large, sharp claws can inflict serious wounds, and if provoked, goannas will bite. I followed this fellow for a while but tried to maintain a respectable distance. At one point, however, I got too close and was expecting it to flee, but instead it crouched and flattened its body, and closed its eyes (4th photo). When viewed from above, this posture makes them look much larger. I have also seen this behavour from other lizards like bearded dragons (Pogona barbata). I backed right off and it disappeared into the surrounding bush. It also looked massive from behind with those powerful hind legs, but he still kept an eye on me. There is plenty of information about goannas at the two reference links.

Spotted in the park area at Bobbin Head, on Cowan Creek. This waterway is a saltwater tributary of the Hawkesbury River and Broken Bay, on the northern outskirts of Sydney. Bobbin Head lies within steep terrain that is heavily wooded, in Ku-ring-gai Chase National Park. Native vegetation runs right down to the rocky shores along the entirety of creek, and also surrounds this park area. Cowan Creek is very deep and tidal. There were very few people around on the day, particularly in the park area, but I reckon this fellow was doing the rounds of rubbish bins, or hoping for bait dregs left by 'nighttime' anglers (fishing is prohibited at this location). Maybe even the odd plover egg or chick, or duckling. This is the only cleared area in what is otherwise dense bushland, so foraging is easier than hunting. Here's some park info - https://www.nationalparks.nsw.gov.au/thi...

An interesting fact: This group contains the world's largest living lizard, the komodo dragon (Varanus komodoensis) from Indonesia which grows to more than 3 metres. The komodo dragon is most closely related to the goanna (Varanus varius) and there is fossil evidence suggesting that komodo dragons once also occurred in Australia.

Too right. I wasn't going to take it from him either. Thanks, Mark.

Super job Neil. The big ones deserve their space.

Thanks, Martin. Did Mark tell you that joke? It's grammatical frugality. Why waste a good 'I'?

Nice sighting. Did you know that goanna is a mispronounced iguana? someone just dropped the 'I'. You know how we get lazy with our words.

I'll spare myself that embarrassment. Probably best if I just watch where I'm going. A classic case of schadenfreude when I've seen it happen to others though (secret chuckles) ;)

Be sure to get a video of any running and screaming. I would think that would qualify for interaction between species :-) A sure winner.

Thank you, Brian, Roy and Liana. It was a really nice specimen, and darker than most I've seen. I'm sure that added to its shock value :)

Beautiful animal. I'm glad you didn't tread on it too! Wonderful spotting and great notes. Thank you for sharing Neil :)

Thanks, Tukup. It was a handsome animal. Lucky for me I didn't walk on top of it, otherwise lots of running and screaming, no doubt ;)

Great one Neil. Fantastic shots. Thanks.