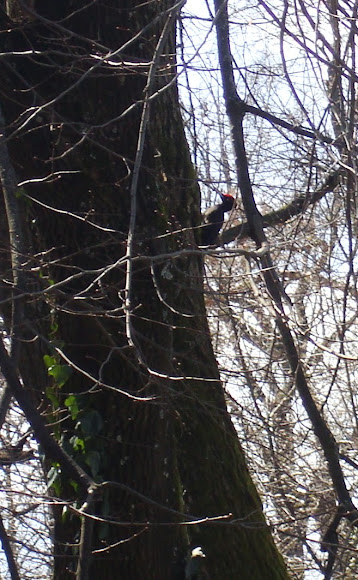 The Black Woodpecker measures 45 - 55 cm long with a 64 - 84 cm wingspan. Body weight is approximately 250 - 400 g. It is easily the largest woodpecker in its range and is second in size only to the Great Slaty Woodpecker amongst the woodpecker species certain to exist. The plumage of this crow-sized woodpecker is entirely black apart from a red crown. In males, the entire crown is red, but in females only the top hindcrown is red with the rest of the body all black.

The range of the Black Woodpecker spreads east from France across the whole of Europe, excluding the United Kingdom and northern Scandinavia. It is also native to parts of Asia, including Korea, Japan and China, and to the Middle East, including Iran and Kazakhstan. The southern limits of these woodpeckers range are in Spain and Italy, and it has also been recorded as a vagrant in Portugal. The species is generally more uncommon and more discontinuous in distribution in the Asian part of its range.