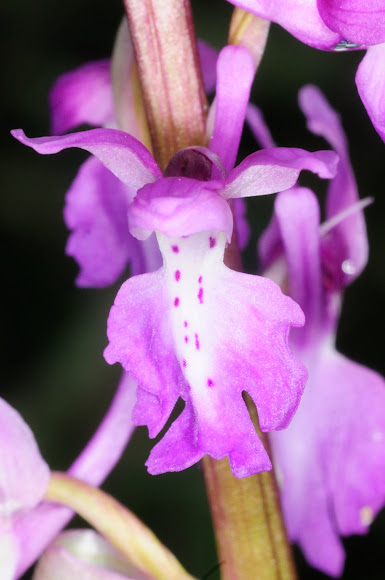 This genus gets its name from the Ancient Greek ὄρχις orchis, meaning "testicle", from the appearance of the paired subterranean tuberoids. These terrestrial orchids have tubers instead of pseudobulbs. They are extremely diverse in appearance. They produce an erect stem. The inflorescence is a cylindrical to globular spike 5 – 15 cm long with purple flowers. They start flowering at the base, slowly progressing upwards. It belongs to the Orchis mascula group. It is a complicated group with large variety. In Spain experts consider four different species in the group: O. ichnusae, O. olbiensis, O. tenera and O. mascula. In O. olbiensis, the spur, horizontal or ascending, is longer that the labellum, which is three-lobed and convex, with crenulated margins and the basal part clearer and dotted with purple-brown spots. The root system consists of two tubers, rounded or ellipsoid. The leaves, grouped at the base of the stem, are oblong-lanceolate, pale green, sometimes with brownish-purple speckles.

In a clear of a Holm oak forest