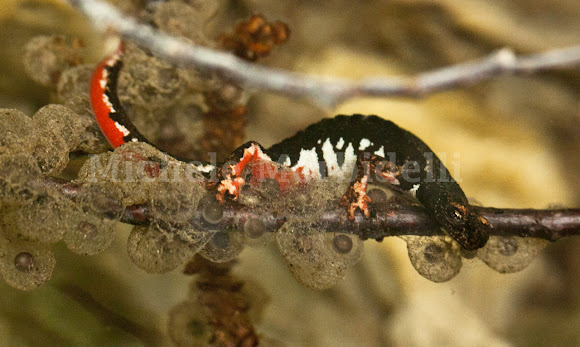 It is endemic of Italy north of the Volturno River, and is more common on the Tyrrhenian side. To the north it is spread up in Liguria. He attended mainly mountainous and hilly areas of the Apennines, usually between 200 m and 900 m above sea level. The preferred habitat: forest areas with abundant undergrowth. It is a hydric species that frequents cool valleys, hills and piedmont, crossed by streams without fish fauna predator.

The spectacled salamander (salamander perspicillata) appears extremely localized in a small area of the survey area, concentrated in hornbeam and manna ash forests with streams of clear water without fish fauna; This species is endemic to only Apennine and is considered an effective indicator of good health of the environment; however, its distribution in the mountain community territory should be subject to further investigation. The species is included in Annex II ("animal species of Community interest whose conservation requires the designation of special areas of conservation") of the Habitats Directive promulgated by the European Union; It is also mentioned in the Red Book of animals in Italy.

It is considered species of high conservation interest and biogeographical and is protected by both European standards (Directive 92/43 / EEC - Habitats Directive [5]), both by Italian law (Presidential Decree no. 357/1997 [6]). Despite formal protection, this amphibian is being threatened by an incorrect management of natural habitats (alteration of forest ecosystems, extensive coppicing along watersheds and valleys, catchments without delivery of instream flow, release of fish fauna for fisheries purposes, extreme activities such as hiking canyoning, etc.