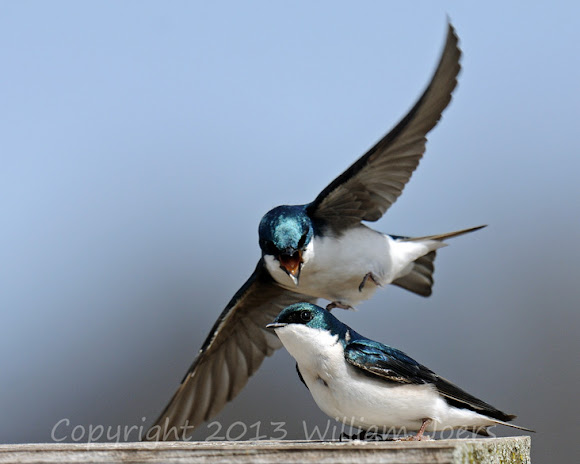 The Tree swallow averages 13.5 cm (5 inches) long and weighs about 20 g. Their bill is tiny. The adult Tree Swallow has iridescent blue-green upper parts, white underparts, and a very slightly forked tail. The female usually has duller colors than the male, often more greenish than the more bluish male. The juvenile plumage is dull grey-brown above and may have hint of a gray breast band.

These birds were found in an open grassland wildlife sanctuary. There are many nesting boxes set up for them, and they use them during the mating season.

Although my captures show these birds angry with each other, they are a communal bird and after the breeding season live in large communities numbering from hundreds, sometimes to nearly 1000. It is quite a sight to see them flying together just before dusk. During the breeding season is about the only time I have seen these birds act as aggressively as I have captured them here. They are not your typical ANGRY BIRD!

Echoing all below...Great Capture, and series!

These Pictures Are Absolutely insane!

Extraordinary shots Willie !! Must have missed it.

Thank you for such kind words, I am deeply honored that you enjoy my attempts to capture the beauty I see in creation, Gilma Jeannette Ospino Ferreira-Norman

Fantastic!! There is nothing I can say of the beauty of your captures that someone have not already said here. Fantastic!!
Thank you for sharing your amazing photography, williefromwi.

Tree swallows are considered the lab mouse of Ornithology. In one research project spanning more than 40 years, scientists are documenting changes to the breeding cycles of tree Swallows in North America. Climate change is raising the temperature and causing spring to come earlier - and so are the tree swallows. In fact more than 9 days earlier since the start of the project. Researchers are studying whether the change in their migration pattern is directly related to earlier springs, or to an increase in food. Whatever the reason it seems to be good news for the swallows as it potentially provides a greater chance of survival for the young born, and may result in an increase in their population.

Thanks Gerardo Aizpuru, you know me, and my motto, to make the "Ordinary look Exrtaordinary" I try rather hard to do that in all my captures.

Joshua, I am using a Nikon D300s ( 12 meg) I use all Nikkor Lens (Nikon). This was shot with a larger lens. I also always shoot in raw, and rarely spend over 2 minutes in photoshop with any of my captures, many times less then a minute. This photo is cropped slightly. Email me if you wish to know more about camera settings or anything. My email address is williefromwi@hotmail.com I also post many more photos to facebook and google+ if you want to see more of my work. Provided I have the time, I am always willing to share settings, and tips to taking better quality photos.

wow these are incredibly nice. what kind of camera setup are you using if you dont mind my asking?

Thank you so much Sachin Zaveri, and Satyen. :)

Thanks KathleenMcEachern, one could say these are real life, ANGRY BIRDS, at least when I was making these captures. Mostly these swallows are very social and communal birds, but not during mating season.

Now these are swallows with attitude, Willie! Wonderful series. Love it.

Thank you so very much António Ginja Ginja, David Mroczkowski, and Sandra Pereira for your wonderful comments.

Great pictures Willie ...I can almost hear the squawking :)

Thank you so much StephenSolomons, and EnvUnlimited, my goal is quite simple, to get those who are marginally interested in wildlife, to fall in love with it, or at least appreciate it much more. Thanks for taking the time to share your thoughts.

such sweet little birds to be so angry. I love this series

It was difficult to choose only 6 photos for this series and even more difficult to choose which photo to lead with. Although I do not post hundreds and hundreds of captures to Project Noah, what I do post tends to be of the highest quality. I strive to make the "ordinary look extraordinary" I am thrilled you enjoy my efforts.