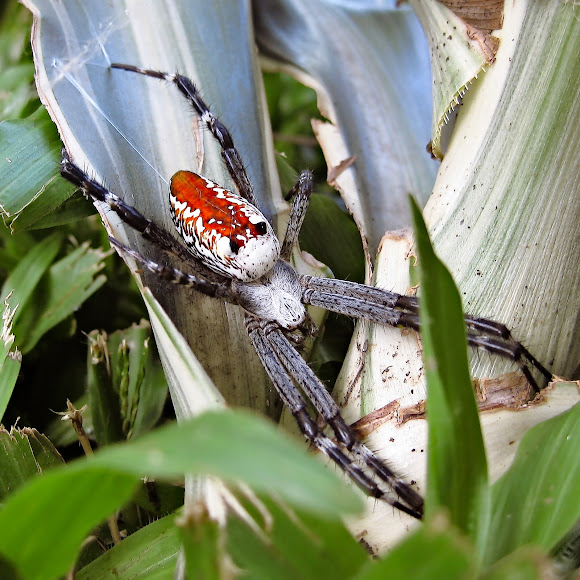 The colourful abdominal markings of this large spider make it reasonably easy to recognize. Although it technically belongs to the orb-web spiders (family Araneidae), Cyrtophora moluccensis does not build an orb web. Its tent-like, highly complex non-sticky web is sometimes considered a precursor of the simplified orb-web. It has a distinct dome with a central peak where the spiders hide and threads above and and below the dome. The spiders often live in loose colonies where the webs may not be joined, but are often built very close each other. The spiders mostly hang in the bottom of the web, upside down. Egg sacs are strung above the dome. The male is much smaller than the female. ♀ 24mm ♂ 8mm. The toxicity of this species is unknown although it is a very common species. It may have the potential to cause mild illness in humans but is not naturally aggressive so bitings by it are apparently quite rare.(arachne.org.au)

Common in open woodland, parks and gardens in south east Queensland and coastal parts of Queensland, Northern Territory and northern Western Australia. They suspend themselves on a large web strung between tree branches; this web is extensive and three-dimensional and may appear tent-like so this species is also called a tent spider; sometimes individual webs are virtually continuous, making this species appear colonial.

After one of my typically frenzied gardening sessions, I accidentally chopped out the main section of plant she was suspended from. She hung on for dear life and ended up on the lawn, hence these photos do not show her in the web. Luckily I realized what I had done, so I quickly took a few photos and then placed her back in the garden. I felt so guilty that I had disturbed her, but only a week or so later this entire property was inundated during the Brisbane Flood of 2011, so nature would have done what I did anyway. Regardless, she was destined to move.... one way or another!

Cheers, Daniele. I dislodged her when I was gardening, and I remember it being a big web too. Never got a shot though, but I will check my files just in case I have a photo there. Thanks for link too :-)

Great pictures of these beauties! If you ever get a picture of the "tent" there is a great mission you can add this it to:
http://www.projectnoah.org/missions/8082...
I have one coming up in my backlog...