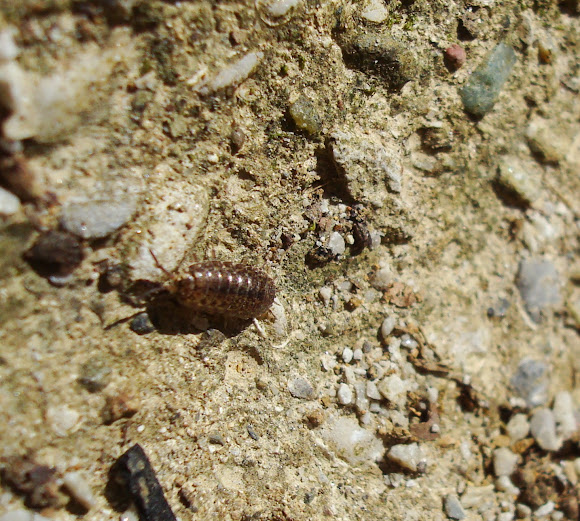 This one was very little, about 4 - 5 mm. Oniscus asellus is one of the largest native woodlice in Britain, at up to 16 mm long. It is relatively flat, and is a shiny grey in color, although juveniles are rougher. Pale patches are often visible on the back of Oniscus asellus; these are areas that store calcium, which is then used to reinforce the exoskeleton after a moult. Moulting occurs in two halves, with the rear half molting before the front half. The exuvia is often consumed by the animal after molting.

It is not known from the Mediterranean Basin, but is widespread in Northern and Western Europe, as far east as the Ukraine, as well as in the Azores and Madeira; it has also been widely introduced in the Americas. Oniscus asellus occurs in a wide range of habitats, including some with little available calcium. It is chiefly found under stones, and on rotting wood. It is the only woodlouse regularly found on heather moors and blanket bogs, where it lives around items such as rotting fenceposts.