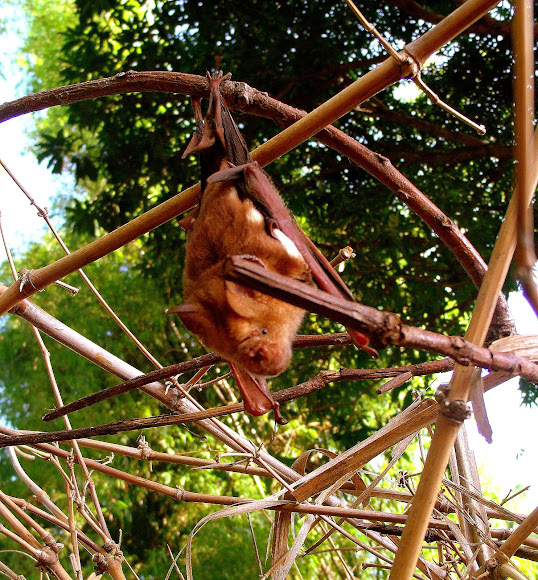 On the Nicobar Islands it is colonial and roosts in small to large colonies, hanging singly from high chambers in cave roofs and roosts with other Hipposideros spp. (Aul and Vijaykumar 2003). It feeds on beetles. It is a low flier in gallery forests, over water pools and also found in disturbed forests (Aul and Vijaykumar 2003). A single young is born in a separate maternity roost (Bates and Harrison 1997), and pregnant females have been observed in the month of March (Aul and Vijaykumar 2003). In Southeast Asia, the species occurs in primary forest and disturbed lowland forest areas, including riparian areas (Heaney et al. 1998). And roosts in hollow trees, caves and man-made tunnels (Heaney et al. in press; Lepiten, 1995; Rickart et al. 1993; Sanborn, 1952). Animals have been collected from trees within agricultural areas (J. Esselstyn and L. Heaney pers. comm.). In New Guinea and Australia, it has been recorded from primary and secondary tropical moist forest, dry open woodland, rural gardens and plantations (Bonaccorso 1998). The species roosts in caves, disused mines, hollow trees and old buildings. The females give birth to a single young (Bonaccorso 1998). Maternity colonies may consist of several thousand animals (Bonaccorso 1998).

This widespread species ranges from the Nicobar Islands of India through Southeast Asia to Australia.