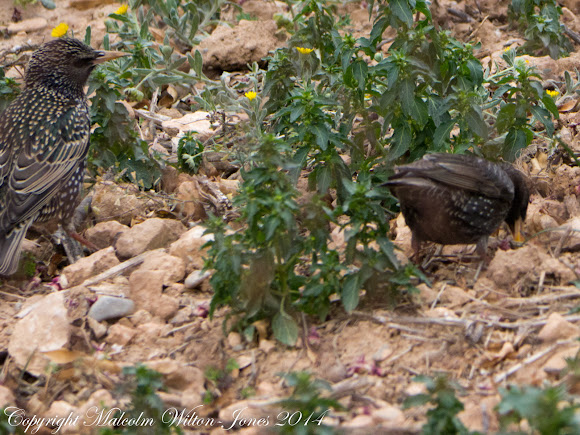 There is no doubt that the bird on the left in the first picture is a Starling (S. vulgaris) but the others have lesser numbers of spots.When they are young both species have variable numbers of spots but by Spring the following year they are usually easily separable. In recent years increasing numbers of S. vulgaris have come here for the winter and it may be that some interbreeding has taken place here in the spring with S. unicolor. The overlap zone used to be close to the Spanish/French border but it may now have moved further south to this area. Certainly huge numbers of S. vulgaris have spent the last winter here, perhaps outnumbering the resident S. unicolor. The remaining birds in this sequence may be S. vulgaris which have simply not reached breeding plumage yet but I would not rule out hybrids. I did not notice any S. vulgaris remaining here last summer but would not rule it out. Certainly this month there are still some S. vulgaris mixing with the S. unicolor flocks.