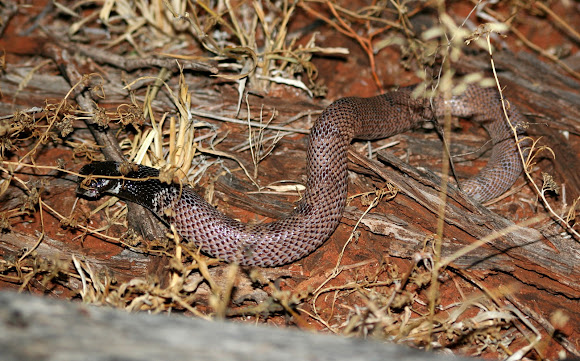 a short compact snake about 45cm long (large specimens reach 70cm). Some individuals have more obvious black spots along the top of the body. It is a front fanged snake with a moderately strong neurotoxic venom. Bites from this snake are reported as extremely painful and require hospital treatment but are not usually fatal. The Shield-nose readily defends itself with much posturing, hissing and striking but not actually biting unless really provoked. As the name suggests this snake has a vertically, flattened and strengthened end to its nose which it uses to burrow through loose soil when hunting.

The dogs alerted me to this visitor in the garden just 4 days after our last spotting (Puff Adder), also in the garden. this snake was ensconced in the tangled base of a geranium hedge among the many old stems; instead of moving out when I tried pushing it with my stick it took to hissing and posturing (rearing up like its 1st cousin the cobra but without the spreading hood) but not moving. As with the Puff Adder, with all the cats and dogs in the garden the Shield-nose just had to be caught and removed, but at least it was early evening this time and still daylight, I succeeded eventually and the photos are all from the release site, by which time it was dark hence the reflections of the flash in the snakes eyes (photo 3).