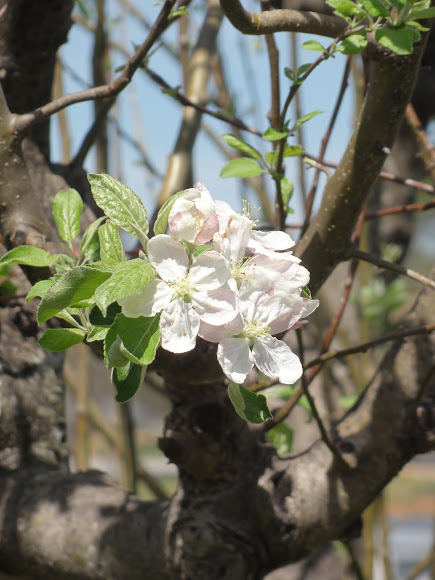 The apple forms a tree that is small and deciduous, reaching 3 to 12 metres (9.8 to 39 ft) tall, with a broad, often densely twiggy crown.[4] The leaves are alternately arranged simple ovals 5 to 12 cm long and 3–6 centimetres (1.2–2.4 in) broad on a 2 to 5 centimetres (0.79 to 2.0 in) petiole with an acute tip, serrated margin and a slightly downy underside. Blossoms are produced in spring simultaneously with the budding of the leaves. The flowers are white with a pink tinge that gradually fades, five petaled, and 2.5 to 3.5 centimetres (0.98 to 1.4 in) in diameter. The fruit matures in autumn, and is typically 5 to 9 centimetres (2.0 to 3.5 in) in diameter. The center of the fruit contains five carpels arranged in a five-point star, each carpel containing one to three seeds, called pips.[4]

Apples were brought to North America by European colonists, and according to the well-known story, spread throughout the Midwestern states by Johnny Appleseed in the 1800s.

Growing near the "Big Red Apple" monument at the depot in Cornelia, GA Listed on Nonnative Invasive Species in Southern Forest and Grassland Ecosystems - http://www.invasive.org/species/list.cfm...