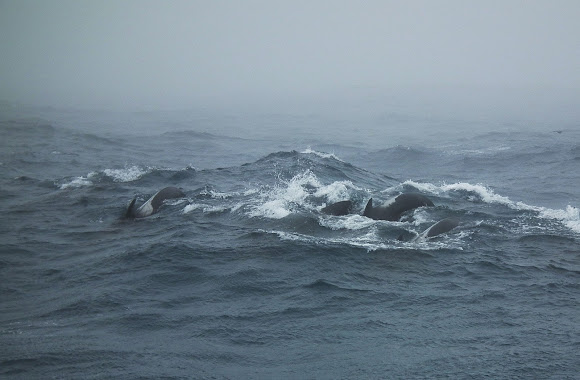 Despite the name, this is in fact a large species of oceanic dolphin. Pilot whales can be discerned from other marine mammals in the Southern Ocean by the presence of a grey "cape" behind the dorsal fin. They have bulbous heads, and we observed them spyhopping, where they poke their heads above the surface of the water. They appeared in a rather large pod of about 20 individuals, with some calves present.

Circumpolar distribution in the Southern Ocean, there is also a northern population restricted to the Atlantic. They prefer cooler waters. We saw this pod on our way back to South Georgia after having been in the Weddell Sea.

We saw pilot whales periodically throughout the trip, but on this particular day they came quite close to us. We must have stopped in a huge swarm of krill or fish or something, because on this morning we also saw many sea lions and humpback whales. For a time, the pilot whales fed alongside the humpbacks! As you can see, it was a stormy morning, so hard to get any good pictures.

Brilliant. That first shot says it all for the location... so atmospheric.

Ooo the weather doesn't look great but i bet it was worth it to spot these!

Woohoo! Thanks Ava and Karen!

Congratulations Laura on having the first Long-finned Pilot Whale spotting on Project Noah!