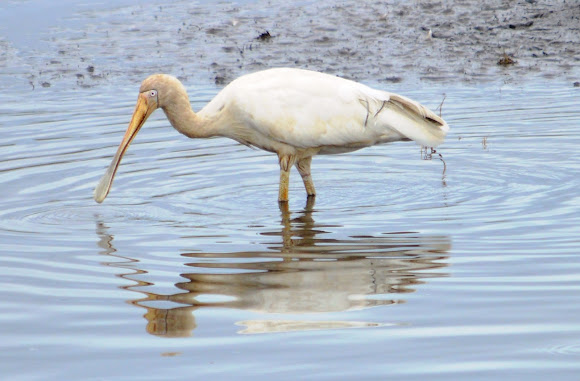 Adults about 90cm. White waterbird, long neck, yellow long legs, yellow long beak with characteristic spoon shape at end used for sweeping side to side & sifting through mud & debris scouring for small fish, molluscs, aquatic insects & other tasty morsels. Eyes appear pale blue. The face & eyes are almost albino in appearance, with sometimes a faded pink tint to the feathers of the face & neck, adults also have some black outlining on face. The call consists of grunting sounds & snaps with the beak. Breeding plumage consists of several very fine long white feathers extending from the chest.

Found throughout much of Australia except very arid regions of WA, SA & NT. This one in wetlands of north east NSW - this was once an extensive wetland system modified over time as development of the country increased. The area still experiences flooding but is not as spectacular as it once was, some say the prolific birdlife & vistas far outweighed anything on offer in wetland systems in Australia today. Birdlife now is very limited with one-off sightings of particular species more the norm rather than large flocks which were once common.

For the patient birdwatchers there are still some interesting & exciting sightings to be found in the wetland systems of the Clarence valley & along other coastal regions. At present the long dry has meant only a few pools are left in low areas & man-made drains. Many birds have moved on to wetter areas, but the few that remain are concentrated near water & provide good opportunities for birdwatchers.