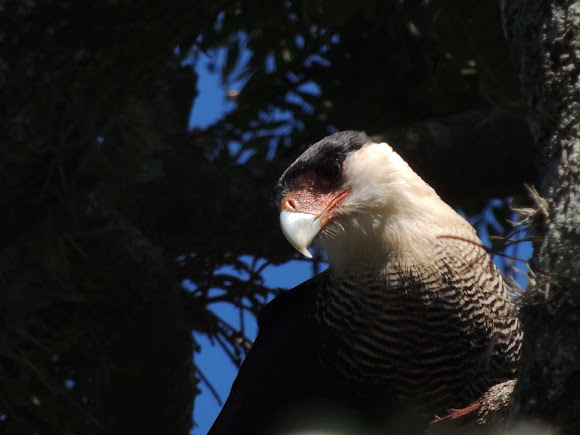 Its wingspan reaches 123cm and length varies between 50cm and 60cm. It is regarded as "Typically Brazilian Bird". At night or in the hottest hours of the day, usually stays perched on the highest branches, under the canopy of isolated trees or in riparian forests. To warn others caracaras its territory or communication between the couple has a call that originates from its common name, "Caracara". In this call, fold the neck and keeps the head on the back, while emitting sound (some species of raptors have the same habit of bending the neck back when emit sound).

It has a wide geographical distribution, ranging from Argentina to the southern United States, occupying a whole variety of ecosystems (except the Andes). I found this specimens (each picture is a different animal) in a transition region between the Cerrado and Atlantic Forest.

I found these specimens while returning from my army training. They were in a tree in the middle of a pasture near of my house.