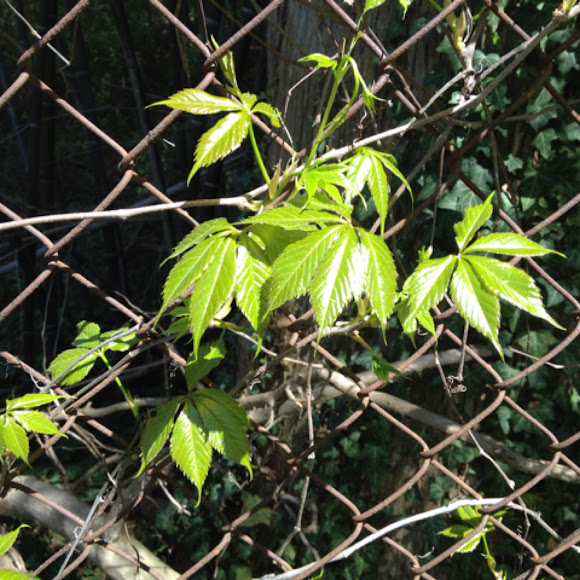 Parthenocissus quinquefolia, known as Virginia creeper, five-leaved ivy, or five-finger, is a species of flowering plant in the vine family Vitaceae, native to eastern and central North America, in southeastern Canada, the eastern and central United States, eastern Mexico, and Guatemala, west as far as Manitoba, South Dakota, Utah and Texas. P. quinquefolia is a prolific deciduous climber, reaching heights of 20–30 m (66–98 ft) in the wild. It climbs smooth surfaces using small forked tendrils tipped with small strongly adhesive pads 5 mm in size. Leaves The leaves are palmately compound, composed of five leaflets (rarely three leaflets, particularly on younger vines) joined from a central point on the leafstalk, and range from 3 to 20 cm (rarely 30 cm) across. The leaflets have a toothed margin. The species is often confused with Parthenocissus vitacea, which has the same leaves, but does not have the adhesive pads at the end of its tendrils. The leaf structure of Virginia creeper is also superficially similar to that of Cannabis sativa, with the effect that persons familiar with only the plants' leaf structures and not with their stem structures (which are markedly different) often mistake Virginia creeper for "ditch weed" (wild marijuana). It is commonly misidentified as Toxicodendron radicans (poison ivy) due to its similar ability to climb upon structures. Like poison ivy, Virginia creeper can cause skin irritations or painful rashes in some individuals. The leaves turn a bright red in the fall (autumn). Flowers and berries The flowers are small and greenish, produced in inconspicuous clusters in late spring, and mature in late summer or early fall into small hard purplish-black berries 5 to 7 mm diameter. These berries contain oxalic acid, which is moderately toxic to humans and other mammals. The berries provide an important winter food source for birds.

Green waxy leaves. Five to six leaves per bunch. Grows on a vine. Causes blisters when on skin.

dandoucette, Thank you for the ID.

Looks like a young Virginia Creeper to me but I don't know why it would cause blisters though.
http://en.wikipedia.org/wiki/Virginia_cr...

Does anyone know what this is?

Please, help with the ID.

Can anyone help with the ID please.