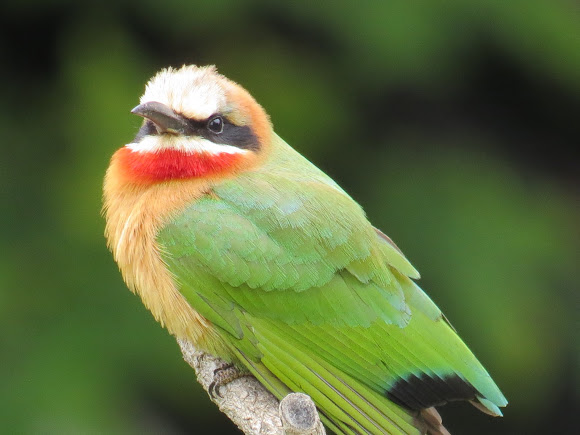 The White-fronted Bee-eater (Merops bullockoides) is a species of bee-eater widely distributed in sub-equatorial Africa. They have a distinctive white forehead, a square tail and a bright red patch on their throat. They nest in small colonies, digging holes in cliffs or earthen banks but can usually be seen in low trees waiting for passing insects from which they hunt either by making quick hawking flights or gliding down before hovering briefly to catch insects.

White-fronted Bee-eaters are found in the vast savannah regions of sub-equatorial Africa. The habitat commonly consists of open country, often near gullies, because this is the region that their food (bees) lives.

A Drive through Rietvlei Nature Reserve, Pretoria April 22, 2013 Rietvlei is situated 25 kilometres from OR Tambo International Airport between Kempton Park and Johannesburg. The nature reserve is 3800 ha and includes Rhino, hippo, cheetah and Lion. The lions are the only animals that are not free roaming. For more info please go to http://www.friendsofrietvlei.co.za/ or www.rietvlei-reserve.co.za We spent two hours driving around the reserve and found a few rare birds that you don’t see every days