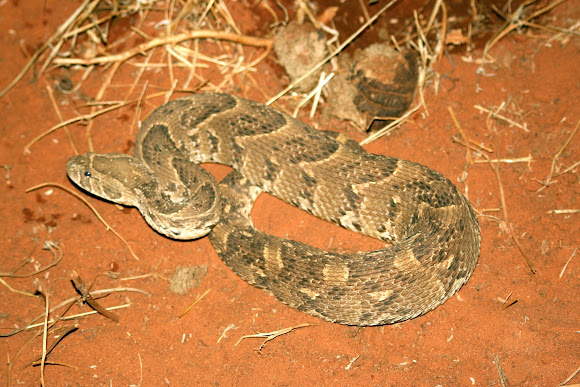 A fairly large fat snake with cryptic colouration; this individual was about 60cm long, full sized adults can reach 1 m. The body shape is a distinctive spindle - fat in the middle and narrowing at each end although the head itself is large and flattened and distinctly wider than the narrow neck (photo 4)

this fellow was prowling in my garden, probably looking for a nice warm possie for the coming winter, big mistake on his part as the garden is currently home to 5 dogs and 12 cats, it was their excitement that drew my attention to the snake.

Once I had located the snake (by its hissing in the dense weedy grass, at night) I then had the problem of keeping the mob at bay while I tried to coerce the snake into a little box that happened to be available. It took 45 mins to accomplish but failure was not an option. Once he was secure in the box with a clipboard for a lid, I took him 500m out into the bush and released him near some dense undergrowth and fallen trees. I cautiously opened the lid and retreated to a safe distance and as is often the case the snake decided to stay put and survey his new surroundings from his now familiar temporary accommodation. This did allow an opportunity to photograph him but it was now rather late and I didn't want to abandon my clipboard so I had to be patient. I didn't want to poke and prod the snake again, I reckoned he was probably stressed enough already.

you're quite right there, Mona. There are more snake bites from Puff Adders than any other snake in Botswana, and it has a strong cytotoxic venom that can cause massive tissue damage but it's not instant so one has time to seek medical help.

The big problem with Puff Adders is that they rely on their cryptic camouflage and don't move whereas most snakes retreat from danger (intruders). Unfortunately this strategy works too well and people just don't see the adders and inadvertently step on them and the snake then retaliates. So if you see it first, as in my garden experience, then the danger is greatly reduced.

You have more courage than me. No trifling with a puff adder for me thank you!