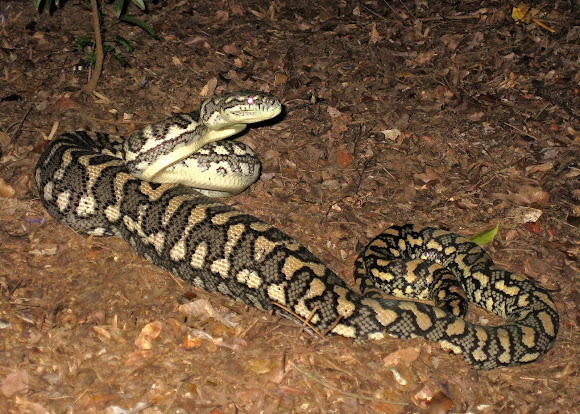 Large, heavy-bodied snake with a highly variable, mottled & blotched pattern and colour. Mostly white to cream on the underside. Head is distinct from the neck. Deeply-pitted scales (infralabials) along bottom jaw and to a lesser extent the upper jaw (supralabials) with small granular scattered scales on top of the head. Mid body scales in 40-60 rows. They are constrictors and thus non-venomous, but bites may cause substantial lacerations or punctures. Average length is around 2.1 meters but large specimens can exceed 3 meters. Largest reliable record at 4.2 meters in length.

They are widespread in Australia in eastern Queensland and northeastern New South Wales. They may be encountered on the ground, draped across boughs of trees or coiled up in undergrowth. They are frequently found residing in the roofs of houses even in well-settled suburban areas, rainforest, wet or dry eucalypt forest, heathland, pasture, agricultural and urban areas. This one was spotted in my backyard.

My first encounter with a wild carpet python, and she was beautiful! After the 2011 Brisbane flood which inundated my home and neighbourhood, many animals were displaced, and this one was no different - she found her way into my backyard. We met late one evening, and had it not been for the external house lights I would have missed her completely, or worse, had a "too close for comfort" encounter! She didn’t flinch at all but I launched like a missile! I estimate her length to be upwards of 2.5 metres, and when I saw this pose I thought she was ready to strike, but unbeknown to me my two cats were underneath the house on the other side of the path, no more than 1.5 metres away. I didn’t see them at first, but that explains the snake’s posture - she could sense their body heat! Cats and snake sat quietly just looking at each other, and no one was game to move an inch - it was a Mexican standoff! After a few phone calls I tracked down a local snake catcher, and he recommended we just leave her be. I was told she’d find a nice cozy spot somewhere and stay out of the way, and that they're good for keeping vermin at bay, but also deter other snakes like eastern browns or red belly black snakes from entering the area. That’s fine by me but the cats seem none-too-pleased. They’d been behaving very oddly for a couple of weeks prior to this encounter and seemed very cautious and nervous, and had obviously been aware of the python’s presence long before me. You’ll notice she’s got a pretty full stomach. Probably unable to eat an adult cat, she could certainly kill one, so my cats’ nervousness was well justified. I can only assume that some poor possum or flying fox had met an untimely end. Rats, birds and other small animals are much easier prey to digest. The following morning I received a call from a nextdoor neighbour and was informed that "my snake" had made an appearance. It had been discovered in the large moraya near her front door. As my neighbour has a young daughter, concerns were raised for her safety with such a large snake in close proximity to the house, so we mutually (and sadly) agreed that the snake needed to be relocated. That evening some snake enthusiasts came by to capture our python. She hadn’t moved all day so finding her was no problem, nor was removing her from the shrub. I would have thought that an animal of her size would become aggressive when being approached and manhandled as she was, but instead, her disposition was dignified and she chose to flee. Pythons are, by nature, quite docile, and after some careful maneuvering she was captured and placed into a hessian sack. Her new home is just down the road at the South Brisbane Cemetery, and it's a quiet area with lots of trees, ground cover and an abundant supply of food. Such an awesome place for a lovely big snake!

Thanks, Sukanya. I got such a fright when I first saw this python, and not knowing much about them at that time, particularly in my local area, I was out of my depth as to what to do. It was a tense evening, but definitely a happy ending for all concerned. Probably one of my most memorable spottings :)

What a wonderful story...and I always like a happy ending too.

enjoyed the story as well as pictures..

Good time to catch her after a decent meal. Nice spotting.

Wonderful spotting and thanks for sharing the story about it!

Congrats on such an awesome spotting.

Thanks, Donna. I'm glad you read the story too. I love writing about my interactions with animals. I believe it's just as important as the photograph because it puts things into context... and yes, she was full!

Beautiful snake and great story. Glad it had a happy ending. The first thing I noticed was she she did appear full.