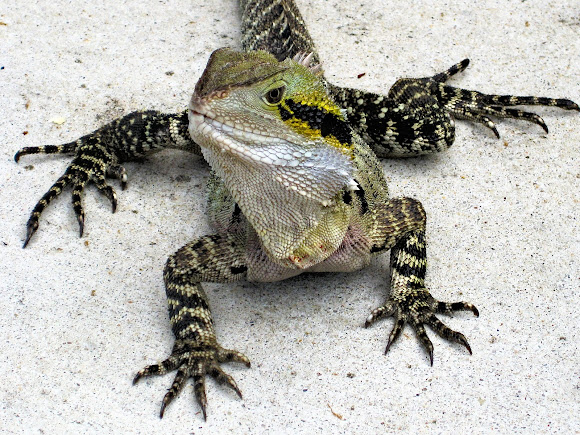 The Eastern Water Dragon is an Australian native. It's a large lizard, beautifully coloured with black banding and a row of spines from the crest of the head to the tail. Usually has a broad black stripe extending from the eye to the back of the head, and males often have a red belly and chest. It is a good swimmer and dives into the water when disturbed. It can remain submerged for around half an hour. Total length up to 100cm including tail. Head and body length 25-35cm. Females lay a clutch of 6-18 eggs in a shallow burrow. She digs a shallow nest about 10-15cm deep in a sunny open position in sandy soil. She then lies above the burrow and deposits the eggs into the chamber below. She then back-fills the burrow by scraping the soil with her back legs and then packing it down with her snout. Loose debris is then scattered over the nest area. Food includes insects, molluscs and crustaceans as well as small vertebrates including fish, hatchling tortoises and small mammals. May be seen scavenging around picnic spots too. Also eats fruit and berries. A friend of mine has a large dragon in her backyard, and it has a special fondness for strawberries. No fear of familiar humans, it's quite tame and is treated like a pet, even though it is wild.

Habitats include creeks, river and lakes in forests, woodlands, grasslands and also parkland in urban areas. Usually seen on rocks, logs or overhanging branches. They can also be seen in suburban yards and man-made ponds. If there's a good supply of water and foliage, they can be spotted just about anywhere in urban areas.

This lovely fellow was on the pavement outside a hospital at Kangaroo Point in Brisbane (no more than 1km from the city's CBD), and after a few photos he shot off into the garden. His hasty retreat was not due to my presence, but rather his pursuit of a female in the garden. Not afraid to venture into the hospital foyer either, always looking for a quick and easy meal. There is a sign on the door 'Do not feed the birds and lizards!' No one takes any notice - not the birds or lizards... or people.

Good notes Neil. When walking along a river bank, enjoying the peace and quiet, these can suddenly leap out of a tree into the water, necessitating a change of underwear. 8-| Fabulous creatures.

Such a handsome fella!