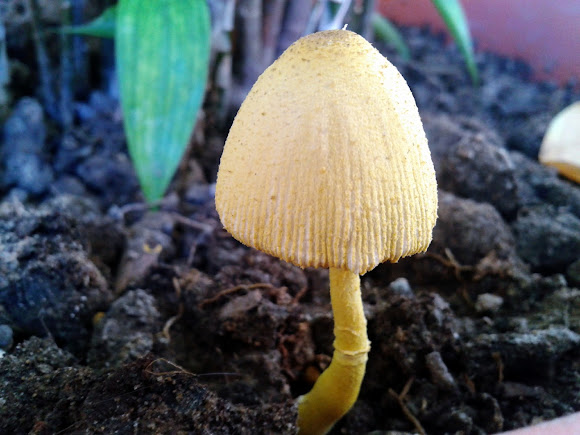 Leucocoprinus birnbaumii is an attractive, brightly coloured tropical mushroom that grows in rich soils. First described by the Czech mycologist August Corda in 1839, it is perhaps best known for its spontaneous appearance in indoor plant pots and greenhouses throughout the world. In fact, L. birnbaumii was first discovered growing on and between pineapple plants in a German earl’s garden. Its name ‘birnbaumii’ refers to Birnbaum, the earl’s Garden Inspector. Because it recycles dead organic material, this mushroom does no harm to its horticultural neighbours, and its burst of brilliance can thus be appreciated guilt-free!

moist mixed organic soil, but they have been known to have great adaptability and sprouts spontaneously. distribution is worldwide, in both natural and horticultural habitats.

thx for the suggestion gully.moy...checked it out and confirmed...thanks and sorry for the late reply~ :)

Notorious for popping up in flower pots :-)