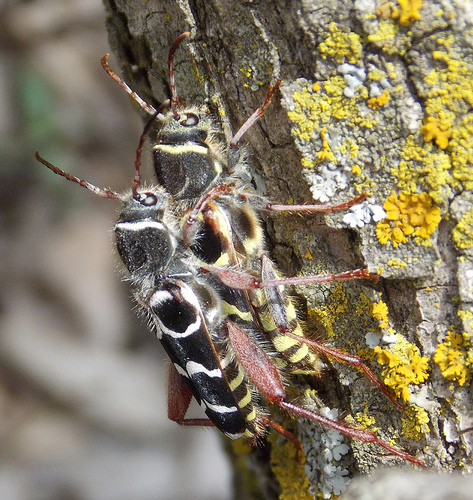 20+mm longBlack beetles, males with white markings on the elytra, females with yellow markings. Both sexes with black and yellow stripes below. Head, thorax and legs covered with white hairs.

When I first spotted these beetles I thought they were large hornets. When I got a closer look I saw that they were beetles and there were many of them on some downed brush. The two beetles in this photo were easily the largest. They were very active so I couldn't get a good measurement, but I'd estimate the male was over 20mm and the female 25-30mm. Most of the other beetles looked to be males and were in the 15-20mm range. They were less mobile so much easier to measure. There was one other pair that looked to be in the 20-25mm range. Found along Redbud trail. 14

Thanks Luis. I was super excited to find them. We've had a cold Spring so far and the trees haven't even leafed out. I was worried I'd come up empty.