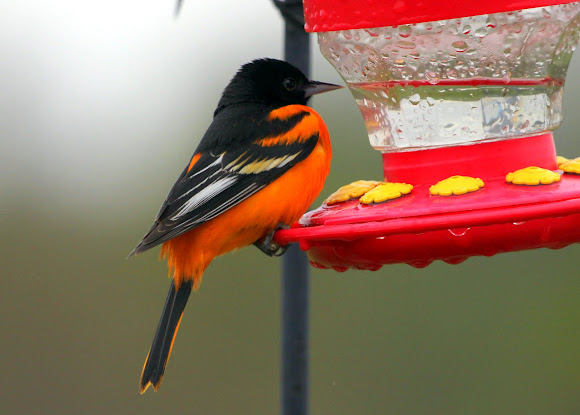 A medium-sized songbird, 6.7–8.7 in in length, they have a sturdy body, a longish tail, fairly long legs and a thick, pointed bill. Adults always have white bars on the wings. The adult male is orange on the underparts shoulder patch and rump, with some birds appearing a very deep flaming orange and others appearing yellowish-orange. All of the rest of the male's plumage is black. The adult female is yellow-brown on the upper parts with darker wings, and dull orange-yellow on the breast and belly

Often found high up in large, leafy deciduous trees, but do not generally reside in deep forests. The species has been found in summer and migration in open woodland, forest edge, and partially wooded wetlands or stands of trees along rivers. They are very adaptable and can breed in a variety of secondary habitats. In recent times, they are often found in orchards, farmland, urban parks and suburban landscapes as long as they retain woodlots. In Mexico, they winter in flowering canopy trees, often over shade coffee plantations. Breeds from southern British Columbia, central Alberta, southern Manitoba and southwestern Quebec, south to Georgia, Louisiana and into Mexico in the west. Winters from southern Mexico to northern South America, occasionally further north at feeders.

Every spring we have orioles who frequent the hummingbird feeders around our house.

fabulous contrasting colours to this beautiful little bird, how lucky to have them feed in your garden!