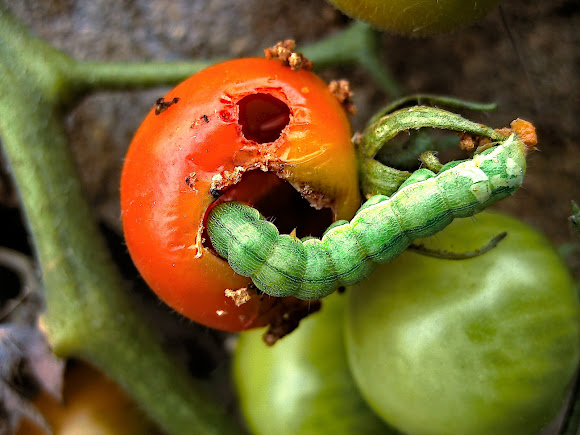 The caterpillar, a measuring worm, is smooth and pale green with white stripes and is one of many species called cabbage worm. It is called a 'looper' because it arches its body as it crawls, inchworm-style. The adult of the species is a nocturnal brown moth.

This species is very destructive to plants due to its voracious consumption of leaves. It is not restricted to cole crops (Brassicaceae); other plant hosts include tomato, cucumber and potato.

ATTACK OF THE KILLER TOMATOES!!! Who’s eating who, I wonder? At the bottom of the garden, this 'life & death' struggle was in full swing. I don’t know, but I reckon the grub should feel nervous; he’s about to get more than he bargained for. Tomatoes aren’t known for their sense of humour and this one looks none too pleased. NB: This was a cherry tomato so the grub is reasonably small.

Thanks. It is. My friend was pretty cranky with it though as it was destroying her tomato patch.

Thanks Argy Bee and Jemma. I recognise the moth, so this caterpillar has been locked in as - Trichoplusia ni
Thanks for you help, and Jemma is right - Go find a cabbage! :-)

I can't find those in Aus. Jemma

why are you eating a tomato?go find a cabbage.

Urrrgh... might be the cabbage looper moth - Trichoplusia ni ? http://www.terrain.net.nz/friends-of-te-... gimmee my tomatoes back.