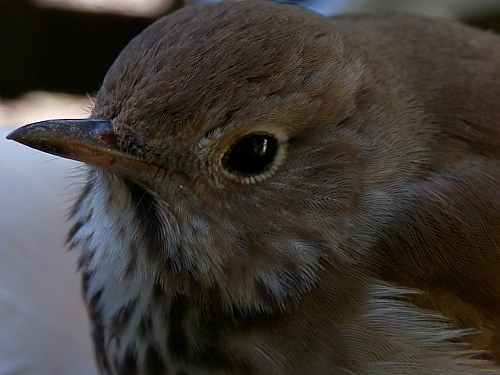 The Hermit Thrush is a medium size migratory songbird of North American measuring approx. 6 or 7 inches. Its tail is noticeably redder than it's rich brown back and head; Its breast is pale with smudged dark brown spots. The eye is surrounded by a thin white eye-ring. (While the Hermit Thrush IS chubbier than other thrushes, this one is extra puffed up in most of these pics.)

Breeding habitats include forested areas, parks, and wooded suburbia, building cup-nests on the ground or in low branches. The mainstay of their diet are foraged insects (in leaf litter and such), but is supplemented with berries and nuts when needs be.

This particular one slammed into my window hard enough to stun itself, causing me to step out to see if it'd broken anything vital. It had not (huzzah!) and after a few hours rest had recovered enough to fly off. I seized the opportunity to take a few pictures. the second pictures hows that when he closes his eye he brings his lower lid up to cover it. You can also see it is covered with fine little feathers. He shows up a it too red in the last picture. (Point-n-click cameras. Whadda gonna do?)

When I first posted this, my main fascination was with the little white feathers around the eyes and on the eyelid. I am also amazed by the whiskers and thought I'd share this link for anyone else who had no idea that birds have "whiskers".