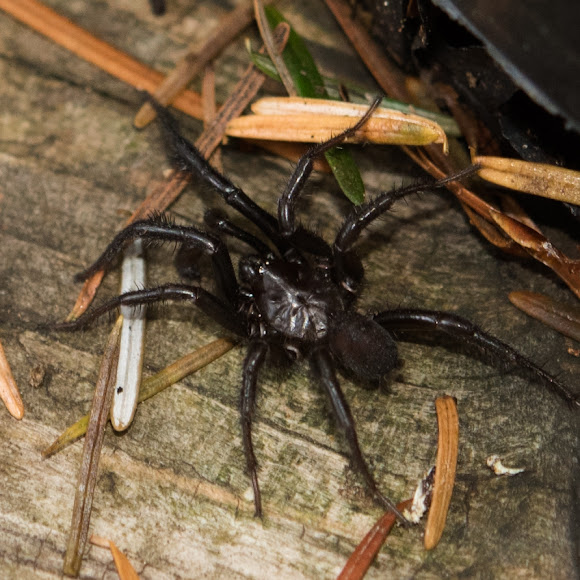 Black spider a little more than an inch long (see fir needles in the picture for comparison). The end of the abdomen had two "spikes". Large palps indicate it was a male. Shiny black legs with prominent long hairs, shiny black main segment, fuzzy abdomen. Running along the ground fairly quickly until it felt threatened when I was taking its picture and it drew its legs inward.

I've entertained thoughts that this is a trapdoor spider (it looks like the pictures) but have not heard of such a creature in our woods. We have black ground spiders that move quickly, but they stay in the grass and are quite a bit smaller. LATER: Apparently they're here but stay hidden. These spiders are similar to tarantulas in that their fangs slice down rather than pinching.

I'm currently thinking this is a Ummidia sp.

Thanks, Daniele! Hope to upload lots more pics this winter; been busy taking them & trying to I.D. Felix, I agree it looks like a trapdoor spider. Hadn't seen one around here before, but it sure matches the descriptions. It hunkered down when threatened so I'm sure it isn't a funnel-web (if we even have them here, which I don't think we do). I'm thinking it's shiny cephalothorax might mean it's not a mouse spider.

Nice to see you around Project Noah again shebebusynow!

Some info with pics here: http://www.spiderzrule.com/trapdoor1.htm...