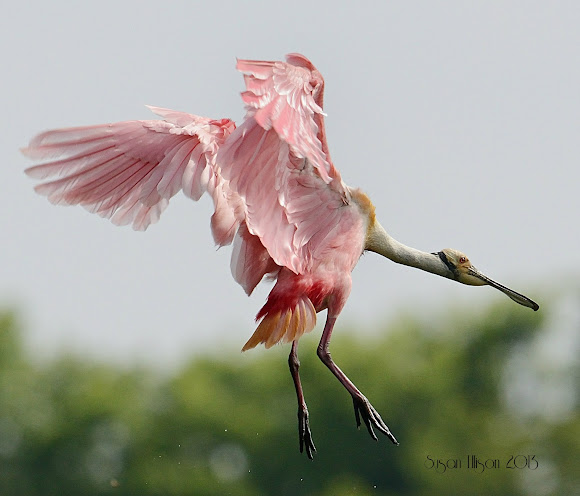 roseate spoonbill spotted taking off at high island, Texas. spoonbill is in breeding plumage. Roseate spoonbills grow to a height of 32 inches (81 cm), with an average wingspan of 50 inches (127 cm). Their distinguishing characteristics include their pink body and legs, white neck and breast. pale green bald head, spoon-shaped bill, and bright red shoulder patch. The roseate spoonbill is found throughout the entire Gulf of Mexico coastline, south to Central America, South America, and the West Indies. Unlike most birds, roseate spoonbills are silent and often solitary when they feed. They swish their spoon-shaped bills back and forth in the water to find small invertebrates, fish and crustaceans. During breeding season, the male uses gifts of nesting material to attract the female. Once mated, the pair remains monogamous. Both male and female take turns sitting on the eggs and feeding the young. Spoonbills eat shrimp, shrimp eat algae, and the algae make their own red and yellow pigments, called carotenoids. Some scientists believe that the pink coloration that roseate spoonbills acquire as they mature is due to their diet of carotenoid-rich organisms like shrimp. The more they eat, the pinker they get. Flamingos are close relatives of the roseate spoonbill. They both have pink feathers, but the flamingos are much larger, with a longer neck. Roseate spoonbills eat primarily small fish and crustaceans. Raccoons and coyotes eat roseate spoonbill eggs and young. Spoonbills reach sexual maturity at approximately 16 weeks. In Texas, their mating season lasts from March through June. Nests are built in thick vegetation above water; are well-built, and deeply cupped. Females typically lay two to five brown-speckled white eggs, which hatch after about 24 days. In about eight weeks, the young roseate spoonbills are ready to fly. Their life span is as long as ten years.

From March through October, roseate spoonbills prefer the bays, marshes and estuaries along the Gulf Coast. Occasionally they will travel inland through the eastern third of Texas. In winter, most roseate spoonbills migrate to Central and South America.

Like many other bird species with beautiful plumage, roseate spoonbills were nearly hunted to extinction during the 1800s. Their striking pink feathers were popular on women's hats, and hunters from all over the United States competed for spoonbill plumes. In the early 1900s, roseate spoonbills began to recolonize areas along the Gulf Coast and slowly increase in number. Today, threats to roseate spoonbill populations come as a result of habitat loss.