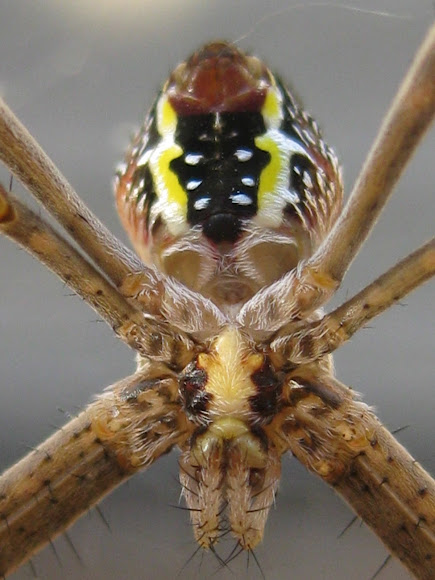 The St. Andrew's Cross spider is so named because it makes a stabilimentum (a tough silk support) in the shape of St. Andrew's cross. They make a medium-sized orb web, and the silk in the cross reflects ultraviolet light, which attracts insects. The spider sits in the middle of this web with a pair of legs pointing toward each arm of the X, but not all spiders have the four parts of the cross. Some have three, two, one or none.

Beauty is in the eye of the beholder! I found this beautiful St. Andrew’s Cross spider on my fence. Most people take photos showing the top of the spider, but the photos I've taken show the bottom. Much more interesting, I think. These were also difficult photos to take, particularly in macro - the wind posed a problem, blowing her backwards and forwards in the web. These are the last photos I ever took of her because later that same evening she was taken from her web. By a bird or micro bat is anyone's guess, but I was sad to lose her :-(

Definitely looks familiar! Your patience was certainly rewarded with these fantastic shots Neil. Thank you for sharing :)

Thanks mate. She was almost blown away too. Very windy when I took these, and that always seems to be the case when I want to photograph spiders in webs. All one can do is give up or rise to the challenge, I guess.

That's what makes this sort of photograhy facinating, we can see so much more than the naked eye. I love it!

Thanks very much, Kerry. No editing either, but the wind made them difficult to take. I had never seen these spiders up so close. The beauty of macro, I guess. Neil :-)