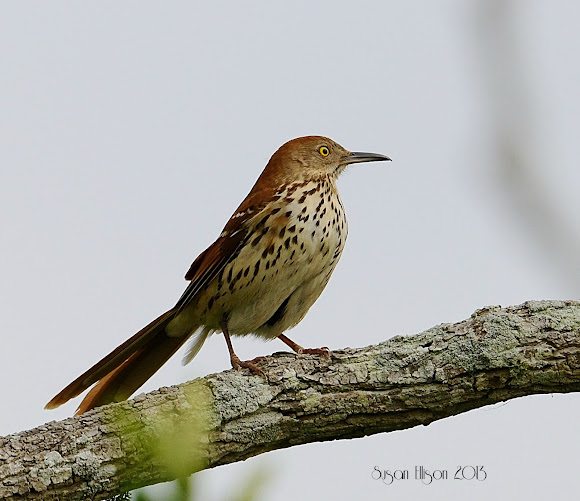 migrating through Texas. As a member of the genus Toxostoma, the bird is a large-sized thrasher. It has brown upper parts with a white under part with dark streaks. Because of this, it is often confused with the smaller Wood Thrush, among other species. The Brown Thrasher is noted for having over 1000 song types, and the largest song repertoire of birds.[3] However, each note is usually repeated in two or three phrases. The Brown Thrasher is an omnivore, with its diet ranging from insects to fruits and nuts. The usual nesting areas are shrubs, small trees, or at times on ground level. Brown Thrashers are generally inconspicuous but territorial birds, especially when defending their nests, and will attack species as large as humans. Short-distance, partial migrant. In the winter, Brown Thrashers move out of the northern part of their breeding range and into the southeastern region, where resident thrashers also stay year round. Some northern birds move southwest into central Texas, outside of the normal breeding range. They migrate at night, either individually or in small groups.

Scrubby fields, dense regenerating woods, and forest edges are the primary habitats of Brown Thrashers. They rarely venture far from thick undergrowth into which they can easily retreat.