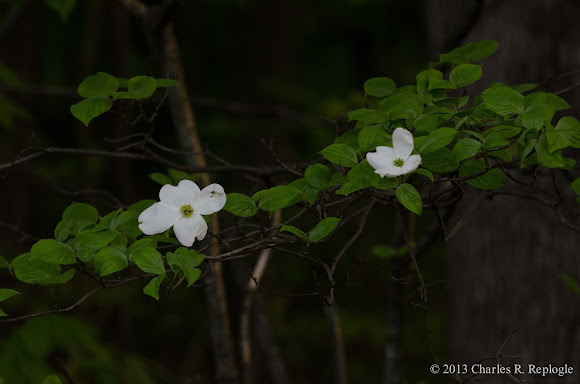 Cornus florida (flowering dogwood) is a species of flowering plant in the family Cornaceae native to eastern North America, from southern Maine west to southern Ontario, Illinois, and eastern Kansas, and south to northern Florida and eastern Texas, with a disjunct population in Nuevo León and Veracruz in eastern Mexico.

Other old names now rarely used include American Dogwood, Florida Dogwood, Flowering Dogwood, Indian Arrowwood, Cornelian Tree, White Cornel, White Dogwood, False Box, and False Boxwood. This species has in the past been used in the production of inks, scarlet dyes, and as a quinine substitute. The hard, dense wood has been used for products such as golf club heads, mallets, wooden rake teeth, tool handles, jeweler’s boxes and butcher’s blocks. Cornus florida is the state tree and flower of Virginia. It is also the state tree of Missouri and state flower of North Carolina. It was used to treat dogs with mange, which may be how it got its name. The red berries are edible, but do not taste good. In 2012, the United States sent 3,000 dogwood saplings to Japan to commemorate the 100 year anniversary of the Washington D.C. cherry trees given as a gift to the U.S. by Japan in 1912.