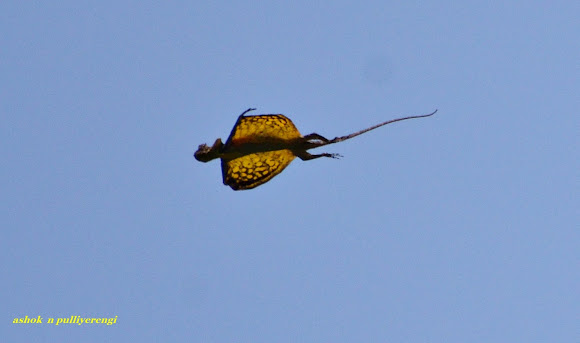 Agumbe is the home of King Cobras. ... ecological hotspot agumbe in western ghats of India is also home to draco ..... I was settling down for breakfast in the dining area (open on all four sides)in a areca nut , I noticed something flying down to one of the areca nut trees.Framing the flight of Tiny Dragons in Malenadu region of Karnataka ... the little Draco lizard is perhaps one of the closest animals we would ever have to the magical beast of folklore. .......................Draco dussumieri, commonly known as the southern flying lizard, is a species of agamid lizard capable of gliding from tree to tree. It is found in the Western Ghats and hill forests of southern India.

Thank you friends....this was worth the wait in rainforests of agumbe in westernghats India

Hello. This is not a "sign of wildlife". This is the real thing. Please remove the "Sign of Wildlife" mission. Thanks

Wow getting a picture of this is really awesome!

I will never forget this moment when I saw one in Kerela!!