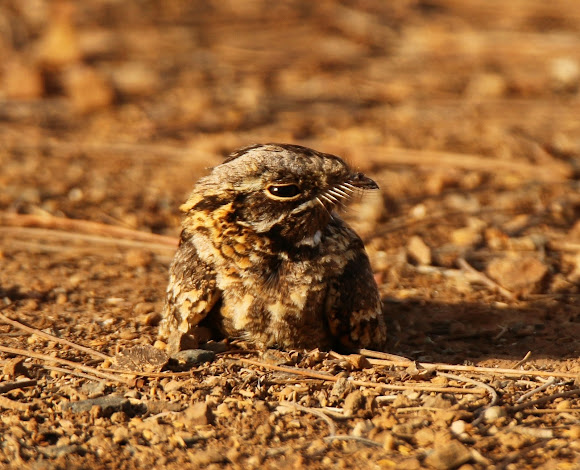 This is one of the best camouflage I've seen in birds so far!Spotted this Nightjar in semi arid habitat,resting on ground. They are most active, and mostly feed, near dawn and dusk.The call is distinctive and has been likened to a stone skipped on a frozen lake (due to which it was also called the "ice-bird" in colonial India) or a ping-pong ball bouncing rapidly and coming to rest.The calls are heard at night.No nest is made; the two beautifully marbled creamy pink eggs are placed upon the bare ground during February to September; the brooding bird, sitting closely, is well camouflaged. Eggs may be moved short distances.The newly hatched chick is covered in down with brown above and light rufous below. The eye is open on hatching and the chick can sit upright and make a weak sound.

The species is found in open woodland, scrub, and cultivation. It usually sits on the ground or low trees and is not found on high perches. The species is found from northwestern India and adjoining parts of Pakistan but not found in the desert region. It is found south of the Himalayas in the low elevations east to Bangladesh, Myanmar and Vietnam. It is also found in Sri Lanka.

Thank you!This was the first and last time I saw the bird,I hear the typical "stone skipping on frozen lake" calls very frequently at night though.

This bird is IMPOSSIBLE to spot. I saw it once; that too because the guide KNEW where it was roosting and took us there...We were vertically separated....but it was right there on the ground, just down the incline.In my straight line of vision. My friend saw it first...I had to see it on her camera screen and ONLY then could I spot it. Great shot!