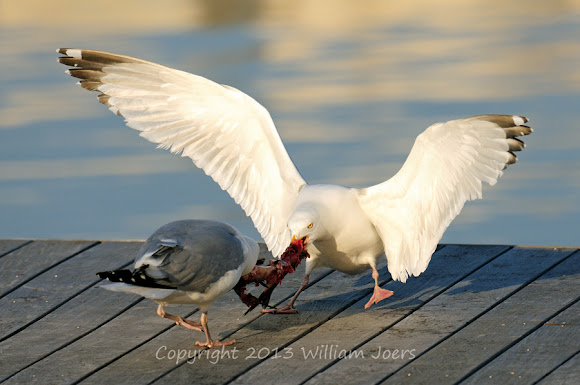 Herring Gulls are a very large gull, they are the quintessential gray-and-white, pink-legged "seagulls." When people think of seagulls, the first picture in ones mind is generally the Herring Gull.

These birds are living in the waters of Lake Michigan in Milwaukee, Wisconsin. They are highly adaptable, and can be found in many many places.

This series of photos was taken behind the Discovery World Museum in Milwaukee, Wisconsin on April 28th, 2013. I had gone down to this area to see an Eared Grebe, that is normally not seen in my part of the world. These two Herring Gulls, fought over this fish, until it was torn in two, at which point both grabbed their share of this game of tug of war, and swallowed it whole as fast as possible.

I just want you to know that you take Awesome pictures, William!

Thank you so very much, Satyen!

Thank you so very much cranbrook-sda-youth1, Ava T-B and Kranti Azad. It was wonderful to be able to watch and capture this moment in time.

NehemiahBrandySteinbrecher, This was quite wonderful to watch. I could post a few dozen photos or more actually of the entire battle for the right to this fish. I happened to be the only person in the area, to see this Tug of War happen, and was thrilled to have my camera, and make the captures

This is a fabulous series of pics. I bet that was fun to watch.