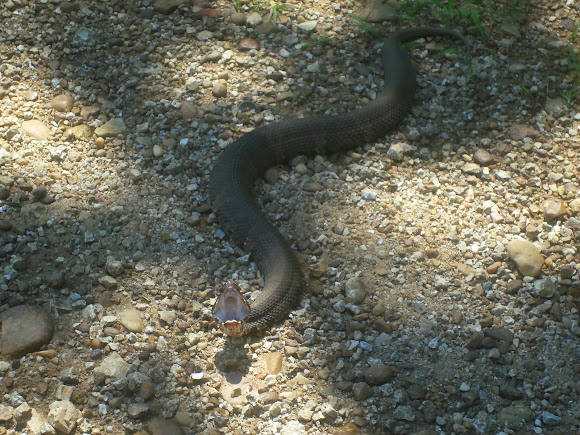 Agkistrodon piscivorus is a venomous snake, a species of pit viper, found in the southeastern United States. Adults are large and capable of delivering a painful and potentially fatal bite. When antagonized, they will stand their ground by coiling their bodies and displaying their fangs. Though the majority of specimens are almost or even totally black, (with the exception of head and facial markings), the color pattern may consist of a brown, gray, tan, yellowish-olive or blackish ground color, which is overlaid with a series of 10-17 dark brown to almost black crossbands. These crossbands, which usually have black edges, are sometimes broken along the dorsal midline to form a series of staggered halfbands on either side of the body. These crossbands are visibly lighter in the center, almost matching the ground color, often contain irregular dark markings, and extend well down onto the ventral scales. The dorsal banding pattern fades with age, so older individuals are an almost uniform olive brown, grayish-brown or black. The belly is white, yellowish-white or tan, marked with dark spots, and becomes darker posteriorly. The amount of dark pigment on the belly varies from virtually nothing to almost completely black. The head is a more or less uniform brown color, especially in A. p. piscivorus. Subadult specimens may exhibit the same kind of dark, parietal spots characteristic of A. contortrix, but sometimes these are still visible in adults. Eastern populations have a broad, dark, postocular stripe, bordered with pale pigment above and below, that is faint or absent in western populations. The underside of the head is generally whitish, cream or tan. Juvenile and subadult specimens generally have a more contrasting color pattern, with dark crossbands on a lighter ground color. The ground color is then tan, brown or reddish brown. The tip of the tail is usually yellowish, becoming greenish yellow or greenish in subadults, and then black in adults. On some juveniles, the banding pattern can also be seen on the tail.

This is the world's only semiaquatic viper, usually found in or near water, particularly in slow-moving and shallow lakes, streams, and marshes.

We saw this snake mid-day, it was about a foot long.