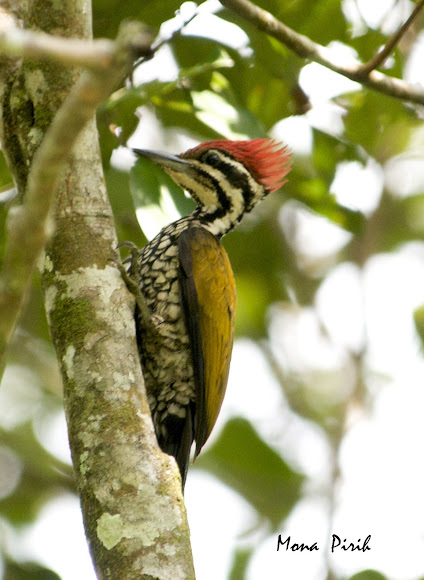 I was in Rawa Gajah, on the savannah in Way Kambas National Park - Sumatra - Indonesia. I found this bird exactly the same time when I found another raptor (I will show the picture later) It is very colorful woodpecker with fantastic name (Goldenback / Common Flameback Woodpecker). The face striped black and white and has red crown and crest on the male, back and rump red. Mantle and wing coverts golden. The differs from Greater Goldenback by having only one broad black malar stripe and only one hind toe. The iris is red, the bill is black and the feet is black with only three toes.

Lives in pairs which call each other regulary. Prefers secondary and open forest, mangrove, plantations. Lowland bird up to 1000 m.

That is my favorite bird number one " Woodpecker ".. I love them..

Not common where I live - Ha! Although I think I wore my hair like that once... Just saying.

Beautiful woodpecker! Thank you also for the explanation.