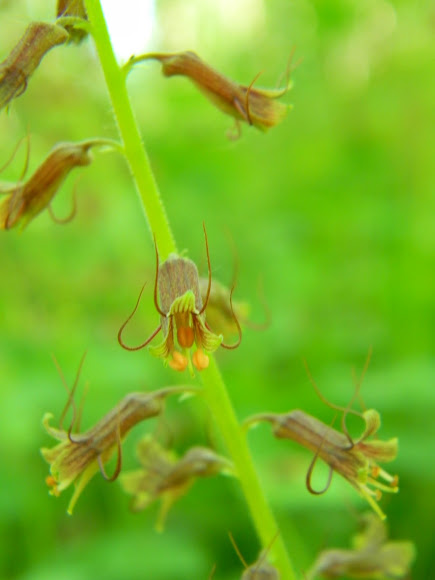 The plant has unusual reproductive habits. It grows plantlets from the petiole near the base of each leaf. The plantlets drop off, fall in the soil, and take root there. It will also reproduce by rhizome and by seed propagation. It bears many small flowers in a loose raceme. Each flower consists of a tubular purple-green to brown-green calyx and four linear or subulate (awl-shaped) red-brown petals, about twice the length of the sepals. It has hairy, five to seven-lobed, toothed leaves and a capsule fruit containing spiny seeds. The plant is also unusual in that it is sometimes diploid and sometimes tetraploid, due to autopolyploidy. The genus was named after the Scottish-Canadian botanist William Fraser Tolmie, while the species name refers to Archibald Menzies, the Scottish naturalist for the Vancouver Expedition (1791-1795).

It is native to the west coast of North America, e.g., in regions dominated by redwoods. It requires moisture and does not tolerate much sun or dry conditions.

At a first glance, this plant looks finished due to the chocolate brown color flowers, but when you take a close look at, these flowers are actually very intricate, exotic and beautiful! The flowers are very tiny (the length of each flower is less than 1/2 inch).