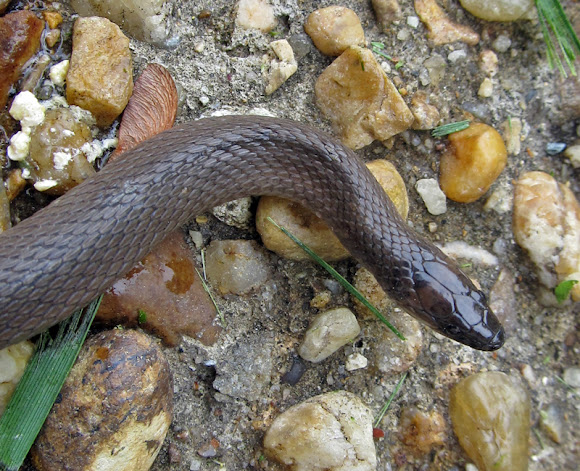 A small, shy snake. Most of the dorsal side of the body is uniformly dark gray or brownish; the ventral side is often cream colored, but may be pinkish or slightly greenish. The maximum length is about 11 inches. Its common name comes from the keeled scales that distinguish it from the smooth earthsnake. It feeds on insects, snails and other small invertebrates. This snake is preyed upon by snakes, frogs, and even large spiders!

It is sometimes found underground in loose soil, but is also found among decaying logs and wood piles, in grassy areas, and along the edges of fields. This one was in a tiny plot of soil (a couple of square feet) overgrown with oxalis and chickweed.

This snake is seldom observed. I found this one while pulling weeds. While most snakes will immediately run away when disturbed, and others will become aggressive, this snake remained completely still and curled up, perhaps playing dead (as is referenced in the literature). Its head was hidden, so I couldn't see whether its mouth was open with the tongue hanging out, as sometimes happens when it plays dead. Would have loved to have seen that.