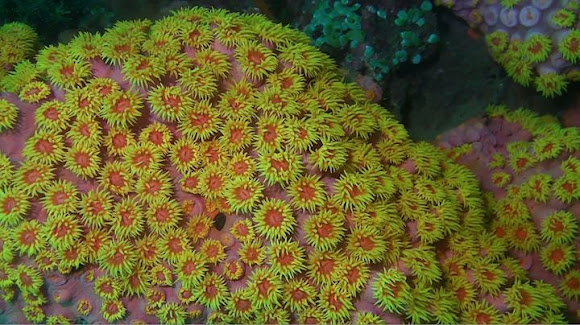 Tubastrea, also known as sun coral or sun polyps, is a genus of coral in the phylum Cnidaria. It is a cup coral in the family Dendrophylliidae.

They can be found from the shallows to the deep water. Sun corals belong to a group of corals known as large-polyp stony corals. This means that while they produce a hard skeleton, they do not build reefs. Different species have polyps in a variety of colors, including yellow, orange, and shades of black. Unlike most corals, Sun corals are not photosynthetic. Tubastrea do not host zooxanthellae, the symbiotic algae that provides energy to the coral via photosynthesis. Instead, they are heterotrophic, and extend long tentacles at night to catch passing zooplankton.