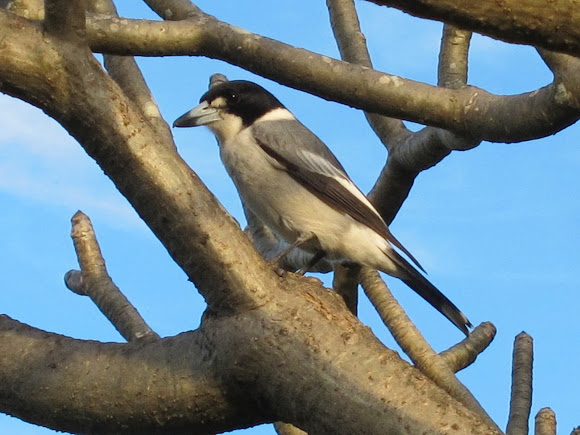 The "grey butcherbird" is an Australian native and belongs to the passerine bird family Artamidae. Adult birds have a black crown and face and a grey back, with a thin white collar. The wings are grey, with large areas of white and the underparts are white. The grey and black bill is large with a small hook at the tip of the upper bill. The eye is dark brown and the legs and feet are dark grey. Both sexes are similar in plumage, but the females are slightly smaller than the males. Young birds resemble the adults, but have black areas replaced with olive-brown and a buff wash on the white areas. Most obvious sign of a juvenile is it does not have a black head. Grey butcherbirds prey on small reptiles, mammals, frogs and birds, as well as large insects, and most food is caught on the ground. The birds sit on an exposed perch and swoop down on their prey. Hunting groups may consist of several birds from a large group, which may comprise three or four adults and several young birds, but birds may also hunt alone or in pairs. They are also more than willing to accept food from humans. These birds range from mid-eastern Queensland, through southern Australia, including Tasmania, to northern Western Australia. There is an isolated population in the Kimberley and the northernmost parts of the Northern Territory.

Grey Butcherbirds are found in a range of wooded habitats, including suburban areas. In inland areas, the birds tend to favour the denser forests.

These photos were taken in my backyard in Brisbane. I could hear the bird calling and found it perched up in a Frangipani tree, catching the last rays of sunlight before dusk. My cats, four in total, love to follow me into the yard for any excursions, and this time was no exception - to watch birds is as good a reason as any. Needless to say, the butcherbird kept its distance. It's one member of two mated pairs that visits my yard regularly. PS: Both references have a brief recording of the butcherbird's "rollicking" call.