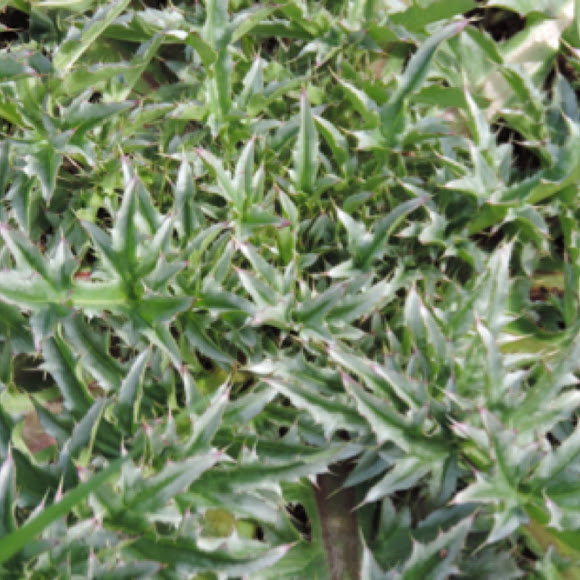 The dark green leaves are coarsely bipinnately lobed, with a smooth waxy surface, and a white to yellowish sharp spine at the tip.

A lot of these thistles were growing in a grassy cut through a heavily wooded area of a greenbelt.

Ecological Threat: Carduus nutans is a highly competitive plant and that can replace much of the native vegetation in pastures and disturbed areas. Because musk thistle is unpalatable to wildlife and livestock, selective grazing leads to severe decline of native meadows and grasslands as grazing animals focus their foraging on other plants. While other plants are being grazed, musk thistle is able to grow and prosper, giving it a competitive advantage and making it a major pest for grazing operations. Biology: Musk thistle is usually a biennial, requiring 2 years to complete a reproductive cycle. However, in warmer climates it might complete a full cycle (germination to flowering) in a single year. Seedlings emerge in mid to late July and develop into a rosette where plants can reach 4 feet wide and they overwinter as a rosette until they begin to stem/bolt in mid-March. Flowers emerge in early May to August. Seed dispersal occurs about one month after the flowers form. The number of seedheads per plant depends on site condition, and ranges from about 24 to 56 on favorable sites and 1 to 18 on less favorable sites. What makes Carduus nustans a difficult plant to control is that, a single flower head may produce 1,200 seeds and a single plant up to 120,000 seeds, which may be windblown for miles and can remain viable in the soil for over ten years.