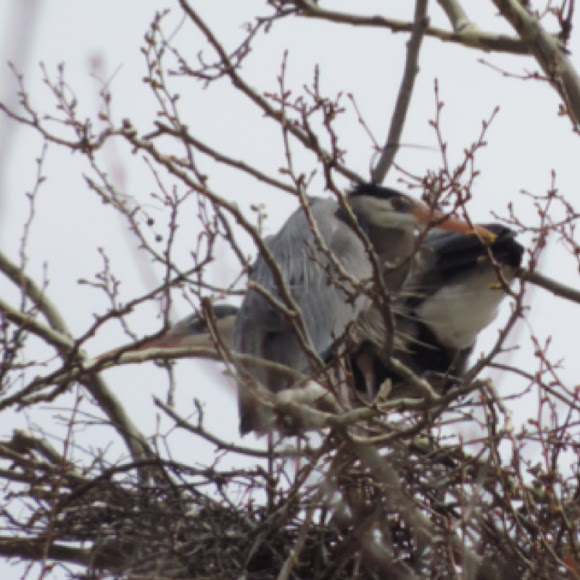 Largest of the North American herons with long legs, a sinuous neck, and thick, daggerlike bill. Head, chest, and wing plumes give a shaggy appearance. In flight, the Great Blue Heron curls its neck into a tight “S” shape; its wings are broad and rounded and its legs trail well beyond the tail. Great Blue Herons appear blue-gray from a distance, with a wide black stripe over the eye. In flight, the upper side of the wing is two-toned: pale on the forewing and darker on the flight feathers. A pure white subspecies occurs in coastal southern Florida.

These herons were nesting in the second of two large cottonwood trees in the greenbelt that had a heronry in it.

Look for Great Blue Herons in saltwater and freshwater habitats, from open coasts, marshes, sloughs, riverbanks, and lakes to backyard goldfish ponds. They also forage in grasslands and agricultural fields. Breeding birds gather in colonies or “heronries” to build stick nests high off the ground.